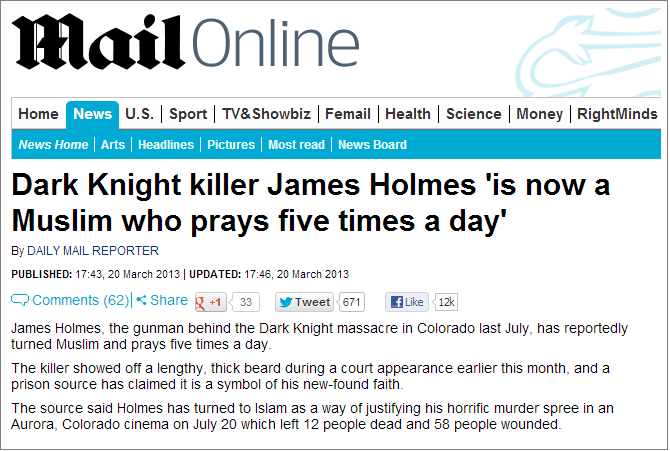 “James Holmes, the gunman behind the Dark Knight massacre in Colorado last July, has reportedly turned Muslim and prays five times a day. The killer showed off a lengthy, thick beard during a court appearance earlier this month, and a prison source has claimed it is a symbol of his new-found faith. The source said Holmes has turned to Islam as a way of justifying his horrific murder spree in an Aurora, Colorado cinema on July 20 which left 12 people dead and 58 people wounded.”

The report continued: “‘He has brainwashed himself into believing he was on his own personal jihad and that his victims were infidels,’ a prison source told the National Enquirer.”

Yes, that’s the National Enquirer, a US supermarket tabloid notorious for publishing sensationalised stories with little regard for the facts. This is the sole basis for the whole story.

True, the Mail goes on to quote the prison source as saying that Holmes’ supposed conversion has upset other Muslim inmates: “None of them condone forms of terrorism or extremism. And they don’t want their religion to be connected to that awful shooting.”

Nevertheless, the headline to the report and the opening paragraphs have the inevitable effect of associating Islam with murder in the mind of the casual reader.

And not just the Mail‘s own readers. The story was taken up in the United States by the Washington Times, and from there it spread across the Islamophobic blogosphere, with Atlas Shrugs and Jihad Watch as usual leading the pack.

“Holmes has found Islam and ‘a way of justifying his horrific murder spreee in Aurora’, Pamela Geller commented. “That’s his jihad – what’s yours? … Did he recently convert or was there some knowledge about his leanings before the shooting?”

Robert Spencer for his part ridiculed the Muslim prisoners who were upset at an alleged murderer converting to Islam:

“Will they explain to Holmes that ‘slay the polytheists wherever you find them’ (Qur’an 9:5) and all the other exhortations to violence in the Qur’an are not to be understood literally? And what will they tell him if he responds by pointing out that Muslims are committing violence and justifying that violence by reference to those verses around the world more or less on a daily basis?

As  Alex Seitz-Wald comments at Salon:

“Now, it’s entirely possible that Holmes has converted to Islam, and even that he brainwashed himself into ex-post-facto justifying his killing with Islam or anything else as Holmes is severely disturbed, by all accounts, and could delude himself into thinking anything.

“But does that say anything about Islam? Of course not. It says something about mental illness. If Holmes suddenly became a devout Pentecostal or Hindu in prison, would these bloggers be connecting the religion to the shooting in the way they are doing now?”