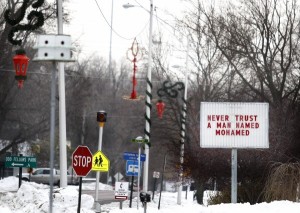 Dakota City councilman Bob Lane whipped up a controversy when he placed a sign on his property reading “Never Trust a Man Named Mohamed.”

Lane, well-known in Dakota City for his strong opinions primarily on local and county government, placed the sign near a multiplex rental unit he owns in the 300 block of North 14th Street, a high-traffic route into the Dakota County town of 1,827. The sign led several residents to lodge complaints at City Hall.

Lane told the Journal he had removed the Mohamed sign after it had been up for more than a week and replaced it midafternoon Monday with a holiday message. He didn’t specify what the Mohamed name referenced.

“It is freedom of speech. Whenever we have a problem in the nation, the first name, the middle name or the last name is often Mohamed,” said Lane, a multi-term councilman who was re-elected this year.

Kathy Bruyere lives in South Sioux City and owns rental property in Dakota City near the sign. “I find this very offensive,” Bruyere said. “We have a lot of East African workers who come to Tyson (Foods packing plant), and they are going to see this every day. A city councilman should not be representing the city of Dakota City in this manner. It is a manner that promotes hate and fear.”