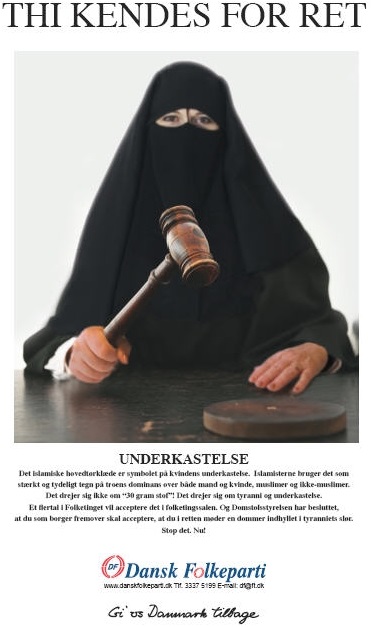 Judges in the nation’s courts will be banned from wearing headscarves and other religious apparel under a proposal put forward by the government on Wednesday.

The bill, which also stated that judges in all courts would be required to wear robes, has the support of a vast majority in parliament, including the Social Democrats, the largest opposition party.

The proposal comes after nearly a month of debate unleashed by a Court Administration decision that it had no legal grounds to exclude Muslim women who wore headscarves from becoming judges.

“Judges that make decisions in court cases, probate courts and county courts need to appear fair and neutral. And we are ready to pass legislation to ensure that,” Lene Espersen, the justice minister, said.

In a commentary in Politiken newspaper on Wednesday, Birthe Rønn Hornbeck, who serves as both immigration minister and minister for ecclesiastical affairs, stated her opposition to a ban, suggesting that doing so would put Denmark on the path towards a “dictatorship”. She also criticised “fanatic anti-Muslims” who had launched a misleading advertising campaign warning against permitting judges to wear headscarves.

See also Associated Press, which reports: “The new legislation … was prompted by discussions over a set of dress code guidelines issued last year by the court administration, which noted that Danish law does not bar judges from wearing head scarves. The guidelines went largely unnoticed until the government’s ally, the nationalist Danish People’s Party, decided to politicize the issue last month. The party, known for its anti-Muslim rhetoric, created a poster showing a woman wearing an all-encompassing burqa and holding a judge’s gavel. The party urged the government to introduce legislation ensuring that courts remain ‘neutral instances in the Danish judiciary’.”