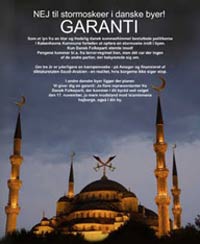 “As a bolt from the blue and peaceful Danish summer sky, the politicians of the Copenhagen municipality decided the other day to erect a grand mosque in the middle of the city,” the party said in a full-page ad published in several dailies. The money will, among other sources, come from the terrorist regime of Iran, but none of the other parties in the local government had any concern about that.”

Copenhagen city council agreed on Thursday, August 27, to prepare a draft for a local plan for a mosque in the capital’s northwest neighborhood. The DPP was the only party that voted against the mosque, to be built by Shiites through private donations, will cost between 40 million and 50 million kroners (5.4 million and 6.7 million euros).

The DPP vowed to seek a referendum on the construction of mosques in the Scandinavian country. Playing politics, the party linked the anti-mosque campaign to the upcoming municipal polls. “The more representatives from the Danish Peoples Party elected at the local elections on November 17th, the greater the resistance against the Islamist strongholds, also in your city.”

In the 2007 parliamentary election, the DPP took 25 seats in the 179-member legislature, remaining the third largest party in Denmark. While not being a part of the cabinet, it maintains a close cooperation with the government parties on most issues.

Copenhagen mayor of health and care Mogens Lønborg criticized the anti-mosque campaign and accused the part of attempting to undermine religious freedom. “I do not care about the campaign. We have freedom of religion in Denmark, and if you try to put obstacles in the way that Muslims gather in mosques, so I think it undermines religious freedom,” he told MetroXpress.

Klaus Bondam, the mayor for technology and environment, also spoke against the anti-mosque ad campaign. “Danish People Party thinks they can get votes to run smear campaign against Muslims in this town,” he said. “I am sure that most in Copenhagen, as I, will shake their head and flip past a lot of the ads, based on their policies of xenophobia and fear of the constitutional freedom of religion.”