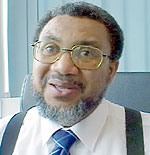 “In her misguided and ill-advised attempt to exercise control on the affairs of the largest independent Muslim organisation, the MCB, which has steadfastly and with honesty represented the views of Muslims over the years, Hazel Blears has used my attendance at the Global Anti-Aggression Campaign conference and the signing of a position document as the peg to hang her coat on.

“Her latest claim as stated in a letter on her behalf to our secretary-general and published in the Guardian today is that I signed a document ‘advocating attacks on Jewish communities all around the world’. She had not raised this allegation before yesterday and it is entirely untrue.”

Update:  See also letters from Daud Abdullah, and Ken Livingstone and others, in the Guardian, 27 March 2009