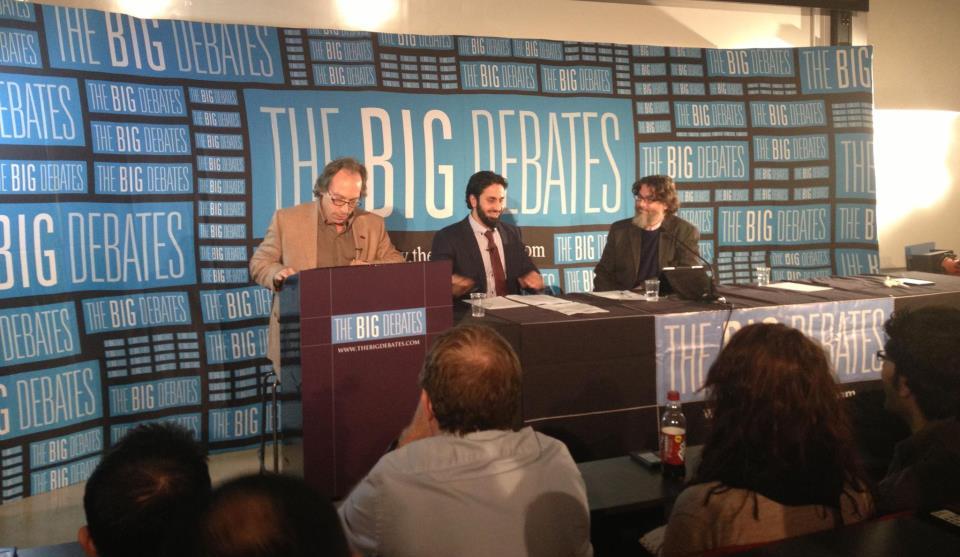 Krauss was unhappy about the organisation of the event, claiming that the audience was separated on the basis of gender, and he tweeted the following comment, which was widely publicised: “Almost walked out of debate as it ended up segregated + saw 3 kids being ejected for sitting in wrong place. I packed up and they caved in.”

Krauss’s complaint was seized on by fellow atheist Richard Dawkins, who informed his Twitter followers: “At UC London debate between a Muslim and Lawrence Krauss, males & females had to sit separately. Krauss threatened to leave.” He added sarcastically: “I don’t think Muslims should segregate sexes at University College London events. Oh NO, how very ISLAMOPHOBIC of me. How RACIST of me.”

Well, in addition to a couple of other tweets that suggested perhaps just a hint of hostility towards Islam and its adherents (“Who the hell do these Muslims think they are?”, Dawkins demanded, followed by “How has UCL come to this: cowardly capitulation to Muslims? Tried to segregate sexes in debate between @LKrauss1 and some Muslim or other”) what is Islamophobic – and, yes, not a little racist – about Dawkins’ response is that he should publish damaging accusations against a Muslim organisation without bothering to establish the facts of the case.

He wasn’t the only one. On Monday UCL issued a statement declaring that, although they were “still investigating what actually happened at the meeting”, they nevertheless accepted the charge that “despite our clear instructions, attempts were made to enforce segregation at the meeting”, and on that basis they announced that iERA was banned from holding any further meetings at UCL.

For their part, iERA responded with a press release expressing their “surprise with the decision by University College London to not allow us to hold any further events on UCL premises” and stating that they would be meeting with UCL to clarify the situation.

Interviewed by the Huffington Post, Zayd Tutton of iERA gave their version of what happened at the event: “There were three sections as agreed with UCL prior to the debate. This was agreed clearly with UCL representatives. Muslim women choosing to adhere to orthodox Islamic principles in sitting in their own area had their own section. As for those who wanted to sit together, male or female, they had their own section where they freely mixed and sat together from the beginning.”

Tutton added the “3 kids”, in defence of whom Krauss had threatened to withdraw from the debate, were in fact two men who forcibly tried to sit in the female section. He said: “When arguing it was about sitting in any area in the auditorium, they were offered an entirely free aisle in the aforementioned Muslim female section, but insisted that they wanted to sit in between the Muslim females, with a view to offending their religious beliefs.”

This account is confirmed by a Muslim woman who attended the debate. She has written:

“As a woman, I should have the choice who I choose to mix with. The organisers were accommodating to all – for those who wanted to sit separately, and for those who wanted to sit together. During the event, 2 men demanded to sit in the women’s section in between the women, after much discussion, the organisers cleared space for them to sit – (there were so many rows), while still trying to respect the position of the women who had requested to be seated separately. A man in particular demanded to sit in between the women in order to ‘challenge their beliefs’. How is this being tolerant? The men were intimidating and the organisers spoke in length to the individuals before asking them to leave as they showed complete disrespect.”

In further tweets Krauss reported that he had held a subsequent meeting with iERA, as a result of which he appears to have accepted their assurance that they had no intention of forcing men and women to sit separately at the debate. But that still wasn’t good enough for Krauss. “I was told there would be no gender segregation,” he complained, “whereas their intent was voluntary gender segregation.” In other words, what he is objecting to now is not that gender separation was imposed on those attending the debate; rather, his argument is that Muslim women who wanted to sit in their own section apart from male members of the audience should have been prevented from doing so.

Atheists like Krauss and Dawkins like to portray themselves as promoters of Enlightenment values and women’s rights. But when it comes to Islam, they ignore empirical evidence and abandon rational thought in favour of blind adherence to dogmatic anti-Muslim prejudice. As for supporting feminist principles, this evidently doesn’t extend to respecting the right of Muslim women to follow their faith – or indeed to defending them against harassment by fellow male atheists.