Yesterday Scottish Defence League supporters Chelsea Lambie and Douglas Cruikshank were jailed for behaving in a threatening or abusive manner likely to cause fear and alarm after being convicted of desecrating Edinburgh Central Mosque with bacon.

Both Lambie and Cruikshank, it should be noted, had previous convictions for threatening and abusive behaviour, which undoubtedly contributed to the judge’s decision to impose custodial sentences. Cruikshank got 9 months as against Lambie’s 12 months because unlike her he had the sense to plead guilty.

Lambie and Cruikshank do however have their defenders, who are outraged that they should receive prison sentences or even have been charged at all.

Here is the New Daily Patriot expressing indignation that their fellow far-right activists should be penalised for harassing Muslims: 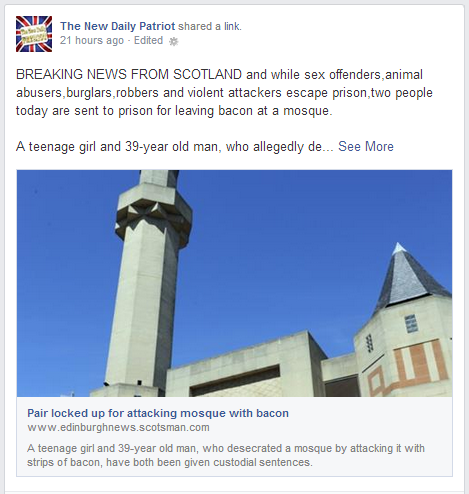 And here is celebrity atheist Richard Dawkins agreeing with them: 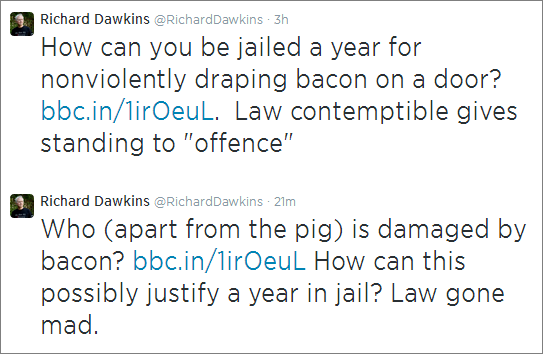 Update:  Dawkins also uses the opportunity to promote the familiar far-right myth about a two-tier system, according to which the courts deal much more harshly with non-Muslims than with Muslims:

The slogan “Behead those who insult Islam” notoriously featured in a 2006 al-Muhajiroun protest against the Danish cartoons. Charges followed and four people were subsequently convicted of soliciting murder and incitement to racial hatred, receiving prison sentences ranging from 4 to 6 years.

Dawkins has a lot to say about the superiority of the scientific method and its respect for empirical evidence. But when it comes to promoting his own Islamophobic prejudices he happily abandons that method.

Update 2:  Steve Rose points out that Lambie and Cruikshank were convicted under Section 38(1) of the Criminal Justice and Licensing (Scotland) Act 2010 for an offence that carries a prison sentence of up to 5 years. So you could argue that the SDL hooligans got off lightly.

As for Dawkins, he remains oblivious to the existence of racially or religiously motivated hate crimes: