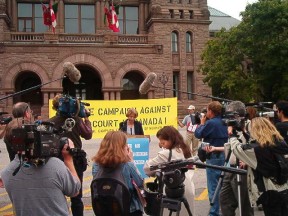 “The Ontario government’s decision to reject the introduction of Islamic arbitration courts in its jurisdiction is an important victory against the spread of political Islam in Canada and a severe blow to those who preach it.

“This victory could not have been celebrated without the tireless activism of Canadian Muslims such as Homa Arjomand, a woman who fled her native sharia-ruled Iran and knows first-hand the inequities of Islamic law.”

A right-wing Zionist applauds the efforts of the Worker Communist Party of Iran and condemns mainstream Jewish organisations in Ontario for their capitulation to political Islam.

But where did everyone get the idea that comrade Arjomand, a leading figure in a far left sect characterised by its extreme, dogmatic secularism and fanatical Islamophobia, is a Muslim? Well, it could just be that they were encouraged in that illusion by exchanges like the following, from a TV interview:

Interviewer:  Ms Arjomand, if we could get your bona fides, are you a Muslim? And have you had personal experience of sharia law?

Homa Arjomand:  Yes, I have. I was born and raised in a Muslim family, and I lived in an Islamic state, Iran, and I experienced lots of horrible, horrible things … I fled Iran….

Of course, it was to the advantage of the WPI to pass themselves off as Muslims because it gave their opposition to the proposed arbitration courts much greater credibility than it would have had if they’d come clean about their actual politics. And in their role as “Muslims” they provided a useful cover for the right-wingers and racists with whom they promoted the same hysterical caricature of Islam.