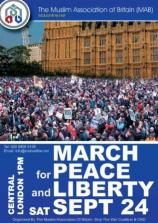 The so-called “War on Terror” has made our world a more dangerous place. 85 percent of the British people believe that there is a link between the dreadful bombings in London and the illegal invasion of Iraq. This link is acknowledged by the Joint Terrorism Analysis Centre and the Chatham House think-tank.

The policy is seen by many as a war on Islam with constant rhetoric by Bush and Blair about “fighting evil ideology”, “sharing our values” and demonising any organisation or person who speaks out against injustice. As a result, an atmosphere of hate and fear is created, attacks on Muslims have recently increased by 600 percent. Furthermore, the onslaught by right-wing extremists on Islam as a religion has crossed every boundary.

Muslims are not in denial, we are in the forefront of fighting terror against innocent civilians which ever the form or shape it takes. But our government is turning a blind eye to continuous oppression, occupation and state-sponsored terrorism around the world.

The first casualty of the “War on Terror” is our own freedom and liberties. We say “don’t take liberties with our liberties”. The new measures proposed by the Prime Minster will remove fundamental freedoms in British society and will not make our country safer.