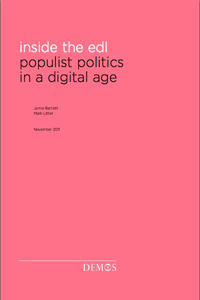 Supporters of the English Defence League are overwhelmingly young men who mistrust others and are deeply pessimistic about the future, according to the first significant study of the UK’s most provocative street movement for 30 years.

The report said almost three-quarters of EDL supporters in an online survey were under the age of 30, and 81% were male.

The EDL has held a series of street demonstrations since it was formed in 2009, often deliberately targeting areas with significant Muslim populations. Many have been marred by violence, racism and virulent Islamophobia.

The group says it was set up to oppose “militant Islam” but the research, carried out by the thinktank Demos and involving 1,300 self-declared EDL supporters, found many were more motivated by a hostility to immigration in general, and others expressed a growing concern about what they see as a threat to British values.

Nick Lowles, from the anti-fascist organisation Searchlight, said: “The report confirms what many of us have felt for some time, namely that many of the EDL supporters are motivated by more general opposition to immigration, multiculturalism and Muslims in general. It disproves the claim from the EDL that they only oppose Islamist extremism.”

Matthew Goodwin, an academic at Nottingham University and expert on the far right, is due to give evidence to the committee. He said that although there were “some limitations” with the Demos research, it painted “a useful picture of this new and embryonic movement on the extreme rightwing right of British politics”.

He said the findings on demographics reflected a wider trend among supporters of far right and populist nationalist groups across Europe.

“On the one hand, it tells us that the EDL is rallying supporters who are similar to those supporting the extreme right elsewhere in Europe: economically pessimistic and insecure working-class men who are most likely to feel threatened by changes such as immigration and minority Muslim communities.

“But on the other, it also tells us that supporters of the EDL are different in one respect from those who fuelled the rise of the now moribund British National party: they are younger. When we look across Europe more generally we can see that the far right is now rallying a generation who have been socialised/grown up amid successful far-right movements.”

The EDL has no official membership and exists principally as an informal online presence that intermittently coalesces into street protests typically numbering between 1,000 and 3,000 people. In an attempt to learn more about the organisation Demos surveyed activists from Facebook pages popular with EDL supporters.

The study found that while the EDL supporters were significantly more likely than average to be unemployed, particularly the older supporters, 30% said they had a college or university qualification and another 20% said they were still in education.

Although the group has repeatedly attempted to distance itself from other far-right organisations, the study reveals that more than a third of respondents identified themselves as BNP voters.

Jamie Bartlett of Demos gives his interpretation of the study here.

Download Inside the EDL: Populist Politics in a Digital Age here.