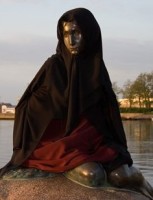 The Little Mermaid was created by Danish sculptor Edvard Eriksen in tribute to Danish storyteller Hans Christian Andersen. Sitting on a rock at the entrance of Copenhagen harbor since 1913, she draws an estimated 1 million visitors a year, and is occasionally targeted by vandals.

She has been beheaded and doused in paint several times. Four years ago, the statue was blown off its perch by vandals who used explosives. In 2004, someone put a burqa, the head-to-toe Islamic robe, on the statue along with a sign saying “Turkey in the EU?” in reference to Turkey’s bid to join the European Union.

So, pretty obviously another right-wing protest against Islam, you might think? Not according to one blogger, who reports the incident under the heading “Muslim THUGS Deface Famous Hans Christian Andersen Statue – Again“.