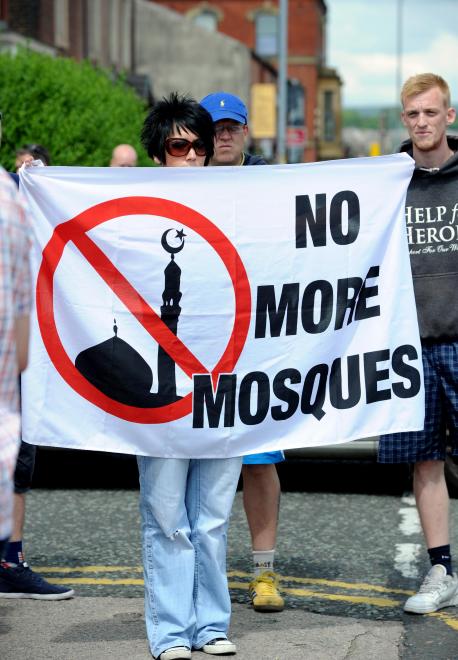 Protestors demonstrated against a planned new mosque in Astley Bridge at the proposed site in Blackburn Road.

About 50 protestors, including members of the British National Party (BNP) and local residents, congregated in Blackburn Road, next to the proposed site of Taiyabah Mosque’s planned new building today.

Hundreds of people – among them people from the protest group Justice4Bolton and members of the local Muslim community – gathered on the site and on the opposite side of Blackburn Road to oppose the protest. Campaigners said it was a “disgrace” that the protest had been allowed to go ahead and that the demonstration was “opportunistic racism”.

A planning application has been submitted to Bolton Council for the construction of a new mosque building, with a dome and minaret tower, on disused land next to the current Taiyabah Mosque in Blackburn Road. The facility, if approved, will cater for more than 1,000 prayer mats and contain 19 classrooms.

Dozens of police officers were deployed to keep the peace during the demonstration, which lasted nearly an hour, and they managed to avoid any violent clashes. It is understood that no arrests were made.

Rhetta Moran, a Justice4Bolton campaigner, said: “I think it is a disgrace that they have been allowed to come out and campaign against a mosque. That land is the property of the mosque so they should not be allowed to drape their flags over the fences. This protest is opportunistic racism. They can dress it up as much as they like, it is Islamaphobic.”

One local resident, who asked not to be named, said: “I am as English as anybody else. The people in this community get on well and support each other, be they white or Muslim. We sort out problems for everybody in the community and work together. This new mosque will not create any problems.”

Union flags and England flags were draped over the fencing surrounding the site. A Facebook group, called ‘Stop the Astley Bridge Mosque’, which has attracted nearly 5,000 likes, had stressed that the protest was public and not political. Some of the protestors, who intermittently chanted “no more mosques”, held a black banner which read “Bolton Council — stick up for us”.

Bryn Morgan, a BNP activist, said: “A lot of Bolton came out and supported us today. On the whole, I think it went well as nobody was hurt and we managed to get our message across. There is a huge amount of traffic on Blackburn Road on Fridays, which is their main prayer day.

“We are not here to oppress anybody but the council is not having a consultation and listening to the views of the people. The fight is far from over. What we are doing is defending what we perceive to be democratic rights.”