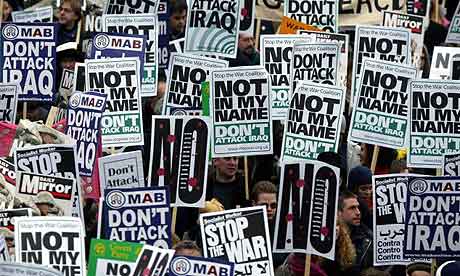 Yesterday’s Comment is Free featured a piece by Nick Spencer on “Muslim voters’ loyalty to Labour” which made the following bizarre claim:

“The Iraq war was supposed to have poisoned Labour’s relations with British Muslims. Tony Blair’s apparently unqualified support for a bellicose Republican administration despised around the Muslim world was deeply unpalatable. Years of anti-terror legislation were judged by some to have stigmatised Muslims and fanned Islamophobic flames. The government’s attempt to outlaw religious hate speech was seen, by sceptics at least, as simply a desperate, ill-thought through peace offering with which they might woo disaffected Muslim supporters.

“According to new Theos/ComRes research, however, no wooing is necessary. If there were a general election tomorrow, 35% of voting Muslims (meaning those Muslims who claim they are more likely than not to vote) would vote Labour.”

Spencer does not provide earlier figures that would allow us to determine whether Muslims’ support for Labour has risen or fallen. He would have been advised to consult a Guardian/ICM poll from November 2004 which showed a dramatic decline in the number of Muslims who said they would vote Labour compared with the period before the invasions of Afghanistan and Iraq. The Guardian reported at the time:

“The Guardian/ICM poll confirms that political support for Labour has halved since the 2001 general election and the Liberal Democrats have emerged as the leading political party within the Muslim community.

“The role of Britain in the Iraq war and Tony Blair’s strong support for the war on terror which is widely seen by the Muslim community to be an attack on Islam, has undoubtedly played a part in eroding Labour’s support among British Muslims. In the 2001 general election it is believed that 75% of those who voted backed Labour.

“The voting intention figures in this poll show that support in the Muslim community for the government is slipping away fast. In March, ICM recorded Labour support at 38% and it has now fallen a further six points to 32% of Muslim voters.”

And now the Theos/ComRes poll shows that 35% of Muslims would vote Labour. What that statistic quite clearly demonstrates is that Labour has failed to win back most of those Muslim voters who abandoned it in response to the government’s support for the “war on terror”.