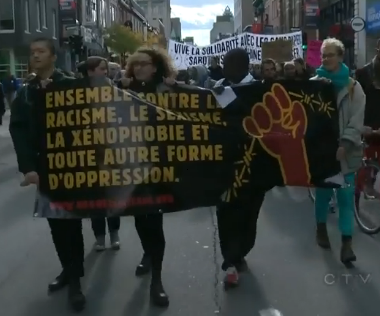 Several hundred protesters took to Montreal streets again Sunday to express their opposition to the PQ’s proposed Charter of Quebec Values, legislation that would ban provincial workers from wearing certain symbols of religious adherence at work.

The march was organized by a group that called itself “Together against the Xenophobic Charter” and attracted demonstrators from a wide swathe of the political and demographic spectrum, including anarchists, devout Muslims, Jews and people of many other stripes.

“I’m here against the charter because it’s depriving people of their right to human expression,” said demonstrator Norman Simon. “It doesn’t matter if you’re an anarchist, a separatist, a Jew, a Muslim, a Canadian, a Communist, I don’t care. But what I do care about is deprivation of rights. There’s the right to choose in this world and the Marois government isn’t honouring that, so we have to insist on co-existence,” said Simon.

Longtime political activist Jaggi Singh was among the organizers on hand marching and assuming duties as DJ for the march.

“We’ve played classic Quebecois folkloric songs like Mon pays by Gilles Vigneault and L’etranger by Pauline Julien. They stand for an inclusive Quebec, so we’re here to show culturally and through our message that we’re opposed to the charter on feminist grounds and progressive grounds and we’re adding to all the events that are happening against the charter. “

The organizing committee of the event also noted that Quebec and Canada were built in “land stolen from indigenous people and built on the dispossession and genocide of indigenous peoples.”