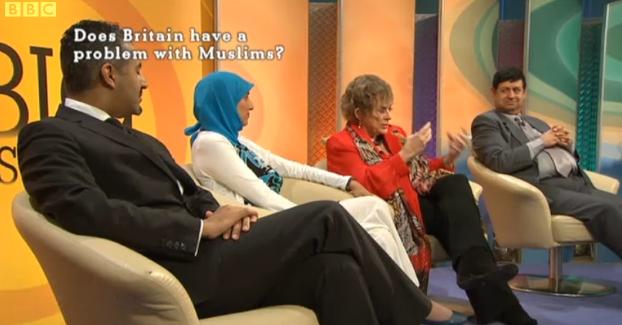 Host Nicky Campbell set the tone with his opening remarks: “Osama bin Laden may be dead but his followers live on. On Friday the Pakistan Taliban killed 80 people in revenge for his death. Now Britain is a centre for the spread of Islamist ideology too, which not only poses a security risk but also inflames tensions between our communities. So our one big question this morning is: does Britain have a problem with Muslims?”

The panel was scarcely an improvement. The only representative Muslim figure was Salma Yaqoob, whose contributions were characteristically reasoned and articulate. Alongside her, however, we had right-wing journalist Ann Leslie, who took the opportunity to refer to veiled women as wearing “bin bags”, Quilliam’s Maajid Nawaz and Taj Hargey of MECO. If the BBC had set out to find two of the least representative and most widely despised individuals within the British Muslim community they couldn’t have come up with anyone much better than Nawaz and Hargey, with the possible exception of Anjem Choudary. Indeed, it came as a surprise that Choudary wasn’t on the programme. Sure enough, half way through Nicky Campbell announced that it had been decided not to invite Choudary … and then read out an email statement from the idiot instead.

Thankfully, this was counterbalanced by some excellent contributions from the audience. True, we had to put up with a lot of nonsense from Davis Lewin of the neocon campaign group the Henry Jackson Society, including a slanderous attack on Salma Yaqoob. But there were good interventions from Saleem Chagtai, Myriam Francois Cerrah, Chris Allen and Yusuf Al-Khoei. Overall, the result was to present a much more positive view of British Muslims than you might have expected at the start of the programme.

Which didn’t please the anti-Muslim racists of the English Defence League one bit. A thread about the programme on their Facebook page attracted over 400 comments, the overwhelming majority of which were filled with the most vicious bigotry towards Muslims, including open threats of violence. Some examples can be consulted here. Screenshots of the whole “debate” can be found at Exposing the English Defence League, who point out: “The violent, racist, islamophobic, threatening rhetoric currently being published by the EDL on social networking is a must check out if you want to see them as they REALLY are.”