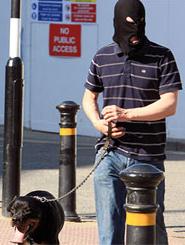 Over at the right-wing US website Family Security Matters, Adrian Morgan has posted a four-part analysis of the anti-Muslim protests organised by the English Defence League.

Observing that “the identification of players on the far left is complex enough” (yes we’d noticed that Morgan has difficulties with that), in the third part of the series he tries to identify the individuals and ideologies behind the EDL protests. To that end, Morgan sent a questionnaire about the EDL to various people linked to the organisation and received replies from Paul Ray of the Lionheart blog, Stephen Gash of Stop Islamisation of Europe and Mickey Smith of Casuals United.

Given the EDL’s official claim that it is protesting against a minority of Islamist extremists like al-Muhajiroun rather than against the Muslim community as a whole, the answers to Morgan’s question “Is EDL against Muslims, Islamists, or immigrants?” are of interest.

Paul Ray replies that “anyone trying to convert great Britain into an Islamic State, whether peacefully or militantly, is an enemy of the British people, so those are who I am against. If a Moslem is not actively engaged in trying to convert their host Nation into an Islamic State then they are not Moslem. Islamists are just the military wing of the religion…. Take a read of Robert Spencer’s Stealth Jihad which talks about the silent subversive war to take our countries over…. Obviously there are many Islamic militants who are arriving and have arrived in Britain through the immigrant route and have claimed and are claiming asylum in the country which then brings the immigrant question into the equation.”

Stephen Gash’s answer is: “We do not believe in moderate Muslims…. Some Muslims are more active than others, but all Muslims want sharia law and Islam to rule the world. Moderate Muslims are those who watch non-Muslims being killed, but still say Allah u Akbar when the killing is happening. Therefore, we obviously oppose Islamists because Islamists are merely Muslims, and Muslims are Islamists. We oppose immigration from Muslim countries.”

The response by Casuals United spokesperson Mickey Smith is more in line with the EDL’s tactic of covering up their extremist views and masquerading as moderates. Smith replies blandly that the EDL “is against Islamic Extremist, not Muslim people per se, those whose declared aim is to make Britain an Islamic state, and who laugh at our soldiers dying on their websites”.

Unfortunately for Smith, this stance is rather undermined by the explicit anti-Muslim statements on Casuals United’s own website: “I once read a book ‘The prophesies of Nostradamus’ and it said ‘Islamic hordes will invade europe but a British counter attack will drive them back’…. Our advice is this, NEVER EVER vote for any Muslim MP or Councillor as its clear their main interest ‘inshalla’ is the advancement of Islam and not the interests of this country.”