Two weeks ago a public inquiry opened into Newham Council’s rejection of a plan by the Abbey Mills Riverine Centre to build a so-called “mega-mosque” on the site it occupies in West Ham.

Supporting the plan, and the right of the Riverine Centre to continue to run a smaller mosque on the site, is Newham People’s Alliance. Leading the charge against the proposal is the MegaMosqueNoThanks campaign headed by right-wing evangelical Christian and former Christian Peoples Alliance councillor Alan Craig.

One of Craig’s main witnesses at the inquiry was supposed to be Tehmina Kazi, director of British Muslims for Secular Democracy, who was expected to denounce Tablighi Jamaat, the conservative Islamic proselytising organisation who run the Riverine Centre, for its allegedly discriminatory attitude towards women. What better way to deflect charges of Islamophobia than to have a young Muslim woman making Craig’s case for him?

We have had some harsh words to say about Kazi’s role in the “mega-mosque” controversy in the past, pointing out that while she has been very ready to denounce “fundamentalism” within the Muslim community she saw nothing wrong in allying herself with a Christian fundamentalist like Craig. However, to her credit, Kazi has evidently had second thoughts about this dubious alliance. On the eve of the opening of the public inquiry, the anti-mosque campaigners found themselves wrong-footed when Kazi announced that she would not be appearing as a witness.

Craig immediately issued a press release (text below) claiming that Kazi had withdrawn because she had been “intimidated by misogynist mosque supporters” and “harried and pressured by members of Muslim-run Newham Peoples Alliance”. Craig demanded: “Why do Islamists always pick on women? Like misogynist bullies NPA intruded on Tehmina’s holiday abroad last weekend. By phone and email they harassed her, intimidated her and then on behalf of the Tablighi Jamaat mosque trustees gave her assurance that their future treatment of women at the site will improve.”

This reaction by Craig was hardly surprising, since he has a record of issuing inflammatory press releases on the “mega-mosque” issue. In 2007 following the attempted car bomb attacks in London and Glasgow, when it was reported that two of the perpetrators had at one time been involved with Tablighi Jamaat (as indeed have millions of other Muslims), Craig issued a press release headed “Olympics mega-mosque linked to London and Glasgow car bomb plots – Arrested suspects radicalised by mosque promoters Tablighi Jamaat”.

But what evidence did Craig have to back up his accusation of intimidation on the part of the NPA? Had Kazi herself made such a complaint?

Well, no – quite the opposite, in fact. In response to the allegations in Craig’s press release, former Times religious correspondent Ruth Gledhill published an article at Lapido Media which reported: “Ms Kazi told Lapido Media that she had been neither harried nor pressured but had accepted the reassurances she had been given about the place of women in the mega-mosque community.” Kazi was quoted as saying: “Withdrawing was a decision I did not undertake lightly. I did it after consultation with several trusted people and a number of assurances on women’s increased participation and involvement in the new facility.”

That seems clear enough, then. By Kazi’s own account she was wasn’t harried or pressured, nor had she been subjected to any intimidation. It is difficult to avoid the conclusion that Craig had made the whole thing up.

However Ruth Gledhill’s article, with its professional commitment to accurate and objective reporting, was not at all to the taste of Lapido Media editor Jenny Taylor, who has been an enthusiastic supporter of the campaign against the “mega-mosque”. (I think we can assume that Gledhill won’t be invited to contribute any more reports to Lapido Media, at least on this issue.) Taylor’s own follow-up piece – entitled “Another Trojan Horse!” – sneered at Kazi for having allowed herself to be “persuaded” (in ironic quotation marks) to withdraw from the inquiry.

In a jaw-droppingly condescending dismissal of Kazi’s individual agency as a woman, Taylor wrote: “Poor Tehmina. Powerful Muslim men have closed ranks to isolate a winsome young woman who was given a job to achieve an objective that has proven after all, too fragile and inventive to stand up against the gale of traditional Muslim patriarchy, and ambition.”

This is of course familiar territory for Islamophobes. Those who dress up their prejudices in the language of feminism often regard Muslim women who have the nerve to disagree with them with utter contempt. Whether it’s wearing the hijab or ending co-operation with a right-wing Christian extremist, the women who make these decisions can’t possibly be acting of their own volition. They are merely the pawns of manipulative Muslim men.

As for Craig, having been exposed for publishing a grossly misleading press release, he decided to bluff his way through it and just repeat the same discredited story. He posted a YouTube video on the Christian Concern website under the headline “MegaMosqueNoThanks.com campaigner Alan Craig highlights intimidation tactics ahead of Mega Mosque public inquiry”, in which he ignored Kazi’s explicit statement to the contrary and repeated the charge that she had been “intimidated”.

Anyone with a shred of respect for truth and honesty would reject Craig’s accusations against Newham People’s Alliance as lying propaganda. Evidently this doesn’t include the Henry Jackson Society’s Douglas Murray.

Fresh from contributing the featured comment piece on the “Trojan horse” affair in last week’s grotesquely Islamophobic issue of the Spectator, yesterday Murray posted an article on the Gatestone Institute website under the headline “Witness intimidation: new London mega-mosque”. Murray parroted Craig’s fraudulent accusation against the NPA, asserting that “the star Muslim witness brave enough to publicly testify against the mega-mosque’s creation now appears to have been intimidated into not appearing at the inquiry at all”. Towards the end of the piece Murray even quoted Kazi’s denial of Craig’s claim. But he preferred to accept the word of a man he hailed as “a principled former councillor” who had taken a “courageous” stand against “this divisive Tablighi Jamaat project”.

You might wonder why Murray is so favourably disposed towards Craig. After all, it’s only a few months since Craig disrupted a Henry Jackson Society meeting on the defence of LGBT rights in Russia at which Peter Tatchell was a speaker by repeatedly shouting “what about children?”. Indeed, the supposed association of homosexuality with child abuse and paedophilia is a favourite theme of Craig’s – he has criticised swimmer Tom Daley’s relationship with an older man on the grounds that it “emboldened predatory gay men and encouraged many boys to submit to them”.

Murray would certainly not accept that sort of obnoxious bigotry from a religious figure in the Muslim community. Only last year he was demanding that Cambridge University should sack Islamic scholar Abdul Hakim Murad on the grounds that many years ago he made homophobic remarks that he now repudiates and for which he has since apologised. Yet Murray is apparently quite happy to ignore deeply offensive views on homosexuality from a fundamentalist Christian in the interests of presenting a common front against Muslims. 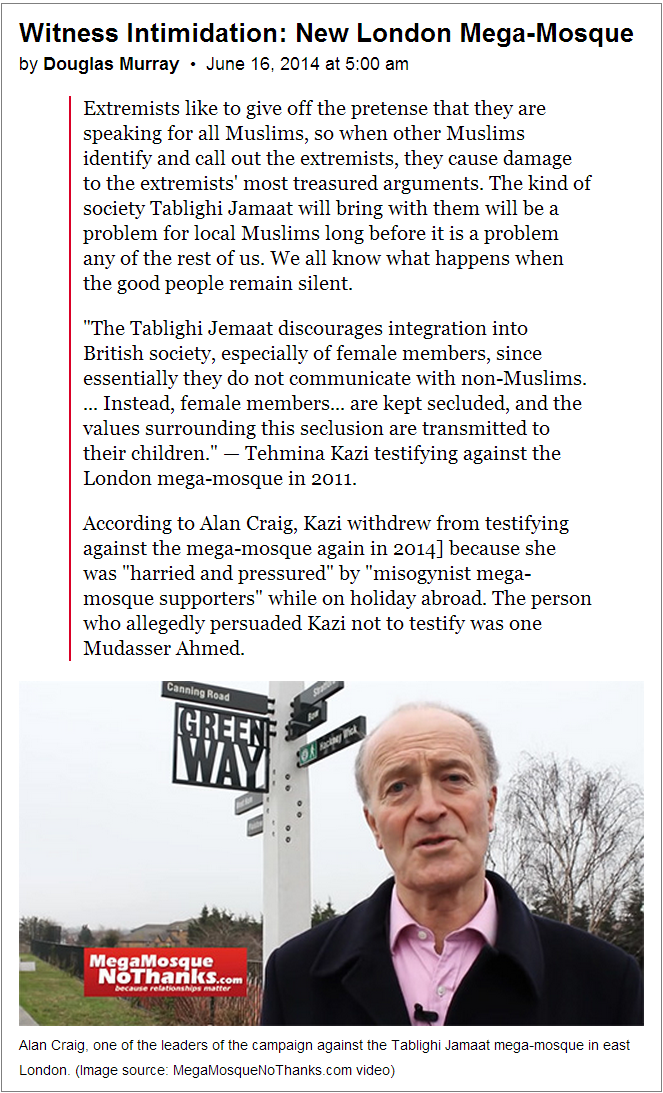 She was “intimidated by misogynist mosque supporters”

Tehmina Kazi, director of British Muslims for Secular Democracy and star opponent of the massive fundamentalist mega-mosque proposed for West Ham in east London, close to the Olympic Stadium future home of West Ham United, has been forced to withdraw as a witness at the huge Public Inquiry that starts at the ExCel Conference Centre in Docklands today.

Ms Kazi, a former Project Officer at the Equality & Human Rights Commission and long-time supporter of Muslim women’s rights, was harried and pressured by members of Muslim-run Newham Peoples Alliance (NPA) while abroad on holiday last weekend. On Sunday evening she conceded and withdrew from the Inquiry in an email to NPA, who in turn late yesterday afternoon triumphantly informed the office of the Planning Inspector who will chair today’s Inquiry

Ms Kazi also publicly opposed the mega-mosque project at a previous Public Inquiry in 2011. Then as now, she courageously objected to the anti-woman bias of Tablighi Jamaat, the fundamentalist group behind the project.

Newham Peoples Alliance last year invited George Galloway and his Respect Party to lead support for the mega-mosque and also held a large pro-mega mosque demo outside Newham Town Hall. Last month NPA was at the centre of the row over Respect-turned-Tory Islamist candidates such as Mufti Shah Sadruddin in the Newham Council local elections.

“Regrettably murky Tower Hamlets politics have come to Newham,” said Alan Craig, director of the long-running MegaMosqueNoThanks campaign who lives just over a mile from the mega-mosque site. “Why do Islamists always pick on women? Like misogynist bullies NPA intruded on Tehmina’s holiday abroad last weekend. By phone and email they harassed her, intimidated her and then on behalf of the Tablighi Jamaat mosque trustees gave her assurance that their future treatment of women at the site will improve.

“Of course this is no assurance at all, as at present women are completely barred from the temporary mosque at the site. For 17 years since they bought the site,by choice it’s been a male-only mosque with no provision of any kind for women. Tablighi Jamaat’s future treatment of women can hardly get worse!”