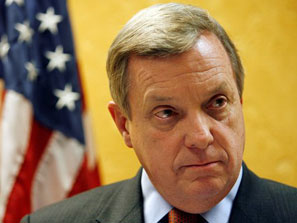 It was billed as the first-ever congressional hearing on the civil rights of American Muslims. But it played more like an Act II than a premiere.

In many ways, the hearing led by Senate Democrats on Tuesday was the dramatic antithesis of one House Republicans held earlier this month on homegrown Islamic radicalism.

Instead of gavel-banging, decorum prevailed. Sobering statistics stood in for emotional anecdotes, and laughter, not sobs, resounded in the committee room. While an audience packed the gallery, the dais was empty save for the six senators who came and went.

But the most striking change was the second hearing’s focus: Crimes committed against American Muslims, not by them. Sen. Dick Durbin, D-Ill., said he convened Tuesday’s hearing because of rising Islamophobia, manifested by Quran burnings, hate speech and restrictions on mosque construction.

And though he did not mention him by name, Durbin twice criticized House Homeland Security Committee Chairman Peter King, R-N.Y., who convened the earlier hearing on the “radicalization” of American Muslims.

King told Fox News on Monday that Durbin’s hearing “is somehow trying to create the illusion that there’s a violation of civil rights of Muslims in this country. It’s absolutely untrue, and to me it makes no sense.”

Durbin, the chamber’s No. 2 Democrat, wasted little time in rebutting King. “Some have even questioned the premise of today’s hearing,” he said in his opening remarks, “that we should protect the civil rights of American Muslims.”

Durbin also criticized King’s controversial statement that “there are too many mosques in this country.”

Durbin’s star witness was Thomas Perez, the Justice Department’s assistant attorney general for civil rights. Since the terrorist attacks of 9/11, a “steady stream of violence and discrimination” has targeted Muslims, Arabs, Sikhs and South Asians in the United States, he said.

“In each city and town where I have met with leaders of these communities, I have been struck by the sense of fear that pervades their lives – fear of violence, bigotry and hate,” Perez said. “The headwind of intolerance manifests itself in many ways.”

Perez noted that the Justice Department passed a grim milestone last month when it secured a guilty plea from a man who torched a playground at a Texas mosque: He was the 50th defendant charged in a federal criminal case of post-9/11 backlash.

Muslim complaints about workplace discrimination have increased 150% since 9/11, Perez said, but he and other witnesses seemed most upset by reports that many Muslim children are harassed at school –called “terrorists” and told to “go home.”

“Parents worry, ‘Will my child be next?'” said Farhana Khera, executive director of Muslim Advocates, who also testified on Tuesday. “And they worry about the future: Will America be hospitable to other faiths? Will its better angels prevail?”