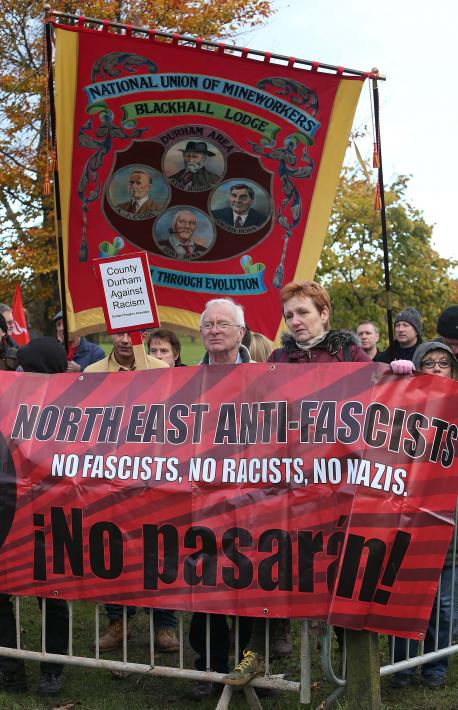 Leading members of the Durham Miners’ Association have received threatening telephone calls from supporters of the English Defence League.

These threats followed a march through Shotton Colliery of 200 supporters of the EDL, mostly from outside the area, on 9 November 2013.

Many who made up this tribe of fascists and racists had travelled from as far as Edinburgh and Sheffield. Only a handful were from the Shotton area and what seems to have incensed them was the flying of the DMA Blackhall Lodge banner at a counter-demonstration.

“Throughout history, fascists have used the same tactics. They wait for periods of economic hardship and then play on the genuine concerns of ordinary working class people. Instead of blaming the capitalist system, the banks and greedy employers as the source of our problems, they try to channel popular discontent against minorities and to foster racial hatred.

“Durham’s miners have a proud history of opposing fascism and encouraging the international solidarity of all people. Many miners died fighting fascism during the Spanish Civil War and in every one of our villages there is a war memorial to brave men who died fighting German and Italian fascism in  World War II.

“The EDL is opposed to all the values that the Durham miners have fought for throughout their history. The EDL hates socialism, the Labour Party and the trade unions. It praised Thatcher when she died and has called on people to vote for the ultra-conservative UKIP.

“We appeal to all right-thinking people in our communities to reject these bully boys and make sure that the politics of hatred never again triumphs over working class values.”