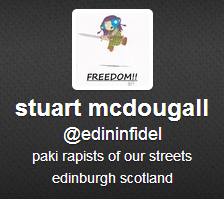 Police are investigating reports of racially offensive Twitter messages as they appealed for calm in the wake of the Woolwich terror attack. Officers have moved to reassure faith groups and have made visits to the Capital’s three main mosques at Potterrow, Blackhall and  Annandale Street.

It comes as a number of allegedly racist and offensive tweets made by a user going by the handle @edininfidel were reported to the police. It is understood there were two complaints in response to tweets posted after the Woolwich terror attack on Wednesday last week. Officers confirmed they were investigating the tweets, and said they were monitoring social networking sites.

PC Debbie Graham, co-ordinator of the city’s counter-terrorism strategy group, Edinburgh Contest, said: “Following the recent events in Woolwich, there is a potential for a rise in community tensions or hate crime – particularly in the Muslim community. From previous experience – Glasgow Airport – there is also potential for increases in hate crime or community tensions for other minority ethnic communities.”

In the six-point statement, PC Graham added: “We are aware that extremists or misguided individuals can use such incidents as an excuse for committing hate crimes. However, we hope to work with communities to identify such individuals quickly and deal with them robustly.” Insisting police had a grip on the situation, PC Graham said black and minority ethnic communities were “safe to go about their lives as normal”.

The message, which said there was “no evidence” at this stage to link events in Woolwich with Scotland, was sent to partners of Edinburgh Contest and Score Scotland, a voluntary organisation serving the minority ethnic communities in the west of the city.

Foysol Choudhury, chairman of the Edinburgh and Lothians Regional Equality Council, said racist incidents had been reported to the group in the past week. He said:

“We have heard reports of people shouting racist comments. In one case, a man stopped at traffic lights in his car and a group of men standing by the road were gesturing at him. When he wound the window down they shouted racial abuse. Online, it seems people are taking advantage on blogs and forums to give Muslims and Asians abuse. They can hide behind the internet. No right thinking person would support what these men in Woolwich have done and we condemn it as much as anyone else.” 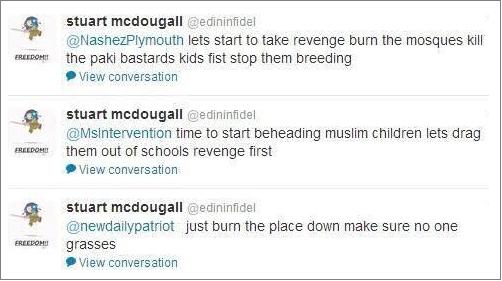