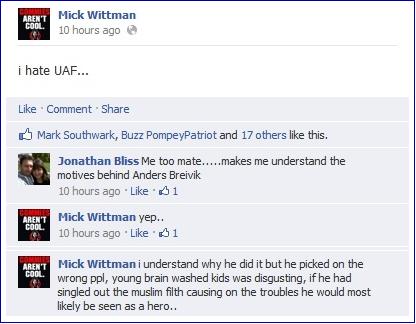 A leading activist from the English Defence League has defended Norwegian killer Anders Behring Breivik and advocated the mass murder of Muslims.

Essex based Gil Gould who also posts as Mick Wittman on Facebook claimed he understood the motives of Breivik but disagreed with his choice of victims.

Gould wrote ” I understand why he did it but he picked on the wrong ppl, young brain washed kids was disgusting, if he had singled out the muslim filth causing on the troubles he would most likely be seen as a hero.”

Gil Gould is a huge supporter of the EDL leader Tommy Robinson aka Stephen Yaxley Lennon and also a close friend to Essex organiser Paul Pitt aka Paul Prodromou.