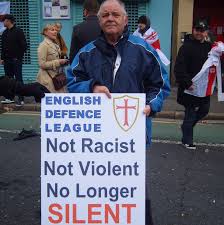 A far-right activist has been handed a community order for assault and firing an air rifle out of his New Addington home.

Frank Day, 65, attacked Samuel Bartlett and later fired a Titan air rifle from his house in Arnhem Drive, New Addington, on September 3. He pleaded guilty to assault by beating and firing the weapon at Croydon Magistrates’ Court today (Friday).

Day, a member of the English Defence League (EDL), was sentenced to a 12 month community order during which he must complete 40 hours of unpaid work. He was also ordered to pay Mr Bartlett £60, and pay £85 costs. The air rifle will be forfeited and destroyed.

Mr Day’s legal representative said his client accepted that firing the gun had been a “foolish act”.

In February 2012, Mr Day publicly campaigned against plans to build a mosque in Purley.

Frank Day. Not racist, not violent. Just a man who wages a far-right campaign against a mosque and shoots his neighbour with an air rifle.