The English Defence League has quashed rumours that its planned demonstration in Tower Hamlets will not be taking place:

The news has been enthusiastically welcomed by EDL supporters: 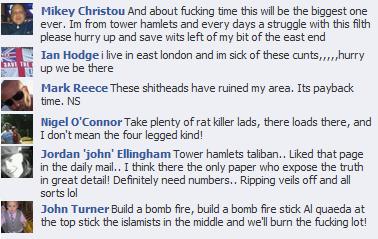 The Jordan Ellingham who suggests that EDL demonstrators should rip off Muslim women’s veils is currently on bail after being charged in connection with an attack on Kingston Mosque last year.