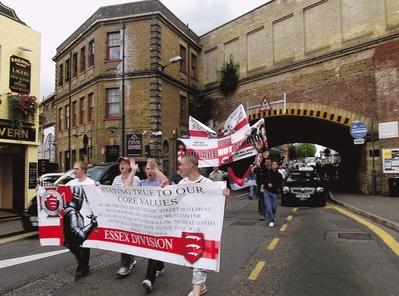 Three men from an anti-Islamic group were arrested on Saturday during a march against plans for a new mosque in Chelmsford.

More than 30 members of the English Defence League waved placards saying “no to radical Islam”, while others shouted racial slurs during a rally from the Plough Inn in Duke Street to the High Street.

The controversial right-wing group was marching against plans for a new mosque in Regina Way, Chelmsford, as part of the Waitrose supermarket development.

Police officers surrounded the mob as they reached Superdrug in the High Street and formed a blockade so that they could not go any further. The protest then spilled back towards Shire Hall where it drew crowds of onlookers.

Chairman of the EDL southeast Paul Pitt told the Chronicle: “We are campaigning hard against this mosque and making sure that it does not happen. Chelmsford has just become a city, we do not want to see a mega mosque here.”

Three EDL members, none of whom was from Chelmsford, were arrested at 3pm on Saturday on suspicion of committing racially aggravated public order offences.

As the shouting grew and a crowd gathered at Shire Hall, police dragged the rowdiest members down the steps and into their police van, waiting by the Saracen’s Head pub. A 35-year-old man from Rochester in Kent, a 19-year-old man from Dagenham and an 18-year-old man from Yateley in Hampshire have been released on bail pending further inquiries.

Mum-of-four Sandra Waller, 59, of Chelmsford, was out shopping when she saw the demonstration. She shouted at the protesters before having a heated stand-off with one of the EDL members.

She told the Chronicle: “It does not matter who you are, we are all human beings. I bet they have never even read the Koran. Everyone has good and bad in them. It should be universal love. It’s disgusting that this is even happening in Chelmsford.”

After enjoying a few pints in The Plough, the protesters marched down Duke Street just after 2pm shouting obscenities, the majority too offensive to print. In unison, they sang: “You burn our poppy, we burn your mosque.”

Greengrocer Paul Matthams, 66, of Chelmsford, said: “Everyone has a different opinion but there are too many immigrants in this country and it costs us money. I have lots of Muslim, Jewish, and Christian friends but it is ridiculous to let so many people in because so many of the natural inhabitants are suffering a great deal. Especially Chelmsford, they keep building new houses and we have not got the road infrastructure. It will only get worse if more people come in.”

The mosque proposed for Victoria Road is part of plans Waitrose has put forward to Chelmsford City Council. Muslim Association, Jamaat of Essex plans to build a four-storey community centre in Regina Way, in the place of a small mosque, which had been there for 20 years before being demolished.

The other mosque in Chelmsford, which caters for a different branch of Islam, is based on Moulsham Street, and has reported a growth in its membership in the last few years.

It had already been alerted by the police on Saturday morning that a demo was taking place. A group of young men from that mosque joined the crowd outside Shire Hall to see what was going on.

Sales manager Wasim Akhtar, 25, said: “We were alerted by the police and thought that we would come down to see what was going on. We think it’s very poor behaviour. We just wanted to come and see how racist Essex is, but we are impressed with the general public’s reaction.

“They are being very supportive to British Muslims. I think that what the EDL are proposing is ridiculous and they don’t have any argument. The mosque is not going to affect them – they are just looking for a reaction or more recruits.”

Ella Rodriguez, 20, of Chelmsford, said: “It is shameful and there is no need for this type of behaviour. I came up to see what was going on because the street was so crowded. There is no need to be racist, but if you feel that strongly about it, there are better ways to express your opinion.”

Chris Dickson, 17, is planning on joining the British Army as an infantry soldier. He said: “Everyone is entitled to their opinion but there are probably better places to do it than in a town centre where there are a lot of different nationalities. I agree with their message.”

A 15-year-old boy added: “My friend is Muslim and was here with me when they started shouting abuse at her. She got really upset and has left.”

One of the EDL members, who did not wish to be named, said: “We hold these flash mobs to see what reaction we get. Then we will hold a meeting and decide whether to do a demo or not. We have agreed with the police that we won’t do one during the Olympics.”