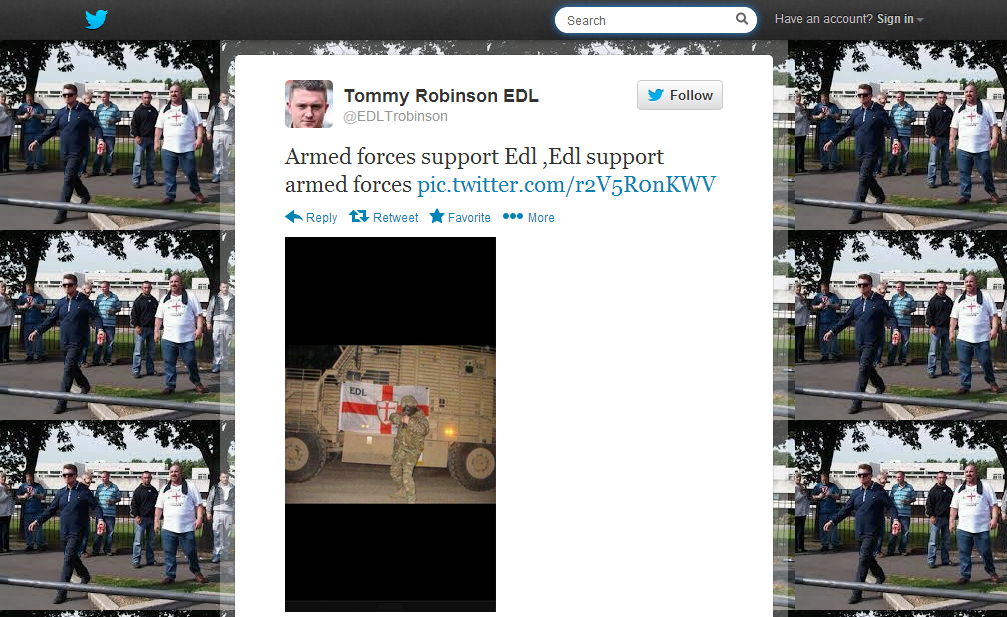 Serving soldiers have been warned that taking part in any English Defence League activities could result in their dismissal.

Defence minister Mark Francois, in a written Parliamentary answer, said that the Army chain of command had been contacted with clear instructions to ensure all service personnel refrained from engaging in any political behaviour, after photos emerged showing what appeared to be serving soldiers brandishing firearms against a backdrop of EDL propaganda.

“In the wake of the appalling murder of Drummer Rigby, General Sir David Richards, Chief of the Defence Staff, wrote to all ranks on May 23 both to express his sympathy for Drummer Rigby’s family and to urge all service personnel not to get drawn into the politics of this incident,” Mr Francois said.

“General Richards was clear that the UK Armed Forces fight to protect people of every creed. On May 30, Sir Peter Wall, Chief of the General Staff, wrote to all Army Commanders and Commanding Officers to reiterate that Queen’s Regulations forbid Regular Service personnel in uniform from taking an active part in the affairs of any political organisation party or movement, or participating in political marches or demonstrations.”

He added: “All Service personnel are expected to abide by the values and standards of the British Armed Forces in all they do. All those who are found to fall short of these high standards or have committed an offence under the Armed Forces Act are dealt with administratively or through the disciplinary process. Ultimately, such action may result in dismissal.”

Mr Francois’s comments were prompted by a Parliamentary Question from former British Army officer Dan Jarvis. The Labour MP for Barnsley Central, who attended Sandhurst as an officer cadet, had asked the Ministry of Defence what advice had been issued to Army personnel regarding EDL membership, attending rallies and their conduct on social media.

The EDL, which as of May 25 described itself on its website as an “inclusive movement dedicated to peacefully protesting against Islamic extremism” also has a Facebook page representing the Armed Forces Division. On June 2, EDL leader Tommy Robinson tweeted: “Armed Forces support EDL, EDL support Armed Forces.”

Accompanying the tweet was a photo of what looked like a masked British soldier posing with a weapon in front of an army truck emblazoned with an EDL flag.

Following the apparent outbreak of Islamophobia on social media used by serving ranks, former Conservative defence minister, Sir Gerald Howarth, called for an investigation into apparent links between extremist groups and the Armed Forces. “These photographs should be investigated to determine if current or former soldiers are involved and action should be taken,” he told the Sunday Express newspaper over the weekend. “They need to discover where these weapons are coming from.”

It’s good that action will be taken against service personnel who publicly support the EDL, but the photographs featured in the Sunday Express report were first published by Hope Not Hate nearly two years ago. HNH identified the individuals appearing in the photos and made no claim that they were serving soldiers. The photo of a soldier that “Tommy Robinson” posted on Twitter would also appear to date from two years ago, when it was published by the Sunday Times, and prompted an investigation at the time.