Today the English Defence League has posted a number of comments and links on its Facebook page to justify the demonstration in Dewsbury tomorrow and to educate its members about the threat posed by Islam. They’re worth checking out if you require confirmation that the EDL is nothing more than a mob of stupid, ignorant, violent bigots.

“An Islamic enclave where secularism is enforced“? Do they mean “Islamism is enforced” or perhaps “secularism is excluded”? It’s difficult to tell. As the EDL’s opponents have often pointed out, it’s an odd sort of English Defence League that shows such a minimal grasp of the English language.

We are also presented with the usual Islamophobic propaganda from the mainstream right-wing press, which feeds the EDL’s own more violent attitude towards the Muslim community. 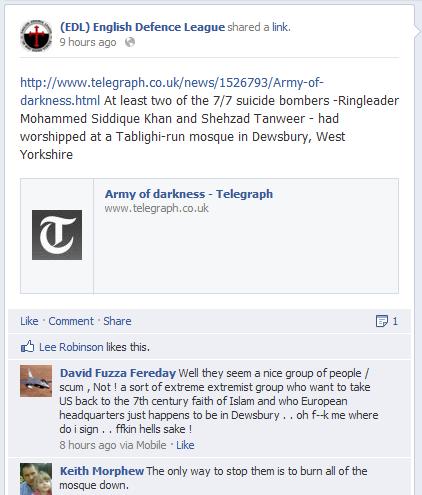 It has escaped the EDL’s attention (and, for that matter, theTelegraph‘s too) that the Dewsbury Markaz is one of the largest mosques in the UK, accommodating a congregation of up to 4,000, so the fact that Mohammed Siddique Khan and Shehzad Tanweer may have attended prayers there is statistically meaningless.

And, as conclusive evidence of the plot to Islamify Britain, we are offered this. 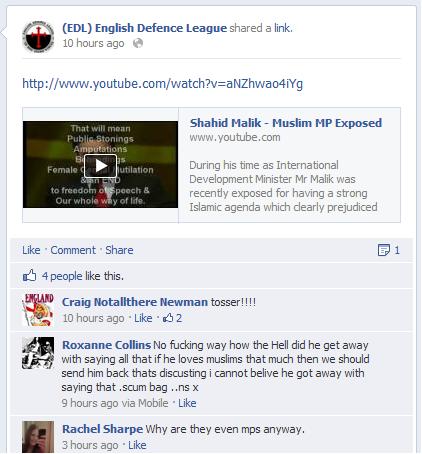 You can watch the Youtube video here. It features a speech by former Dewsbury MP Shahid Malik at the 2008 Global Peace and Unity event, where he expressed the hope that within thirty years we might see a Muslim prime minister in Britain. The video spells out what the EDL apparently believes would be the inevitable consequences of such a development. 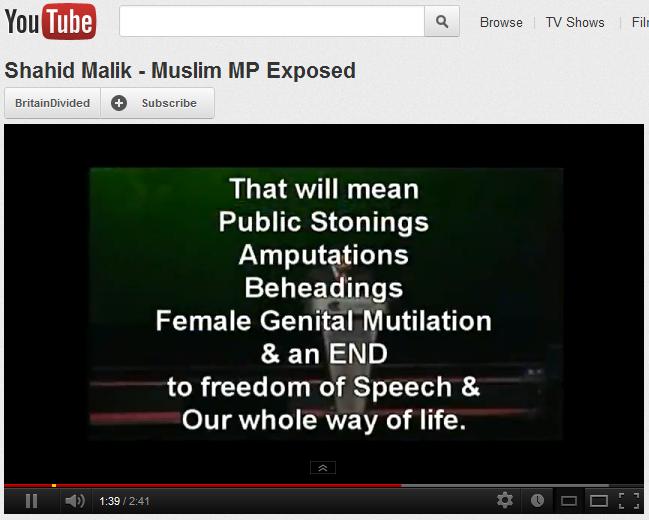