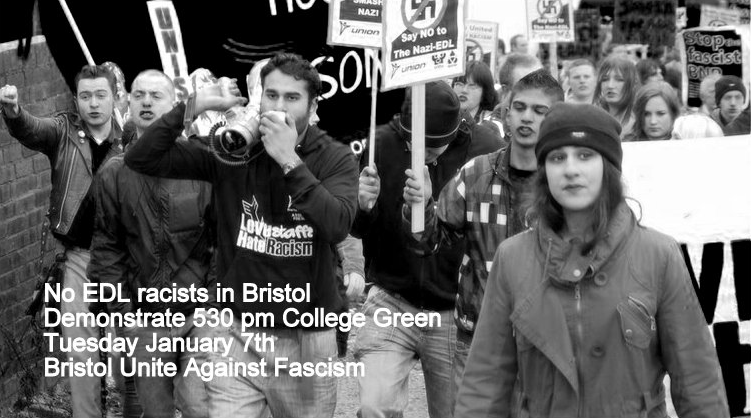 In response to news that council officers have granted a planning application to convert a disused former comedy club (which has been lying empty for the past two years) into an Islamic centre comprising a mosque, community facilities, a café and a flat, the Bristol division of the English Defence League will be holding a demonstration tomorrow evening to protest against what they term a “hate preaching centre”. It will take place outside City Hall, where a meeting is being held at which those who expressed their objections to the development without descending into anti-Muslim bigotry and racism (i.e. very few EDL supporters) will have the opportunity to discuss their concerns with representatives of the Muslim community.

Unite Against Fascism are organising a counter-demonstration under the slogan “No EDL racists in Bristol”.

We have already covered the calls for arson attacks on the proposed mosque that were posted on Bristol EDL’s Facebook page over a month ago (and have still not been removed, despite assurances by Avon and Somerset Constabulary that they were investigating the matter). Bristol division have followed this up with further inflammatory Facebook posts (see here and here) blaming Muslims for grooming, pimping and rape. The EDL nationally has weighed into the controversy, posting a report on its Facebook page today which provoked a stream of virulent Islamophobic abuse, featuring the usual calls for the building to be burned down or desecrated with pig’s blood.