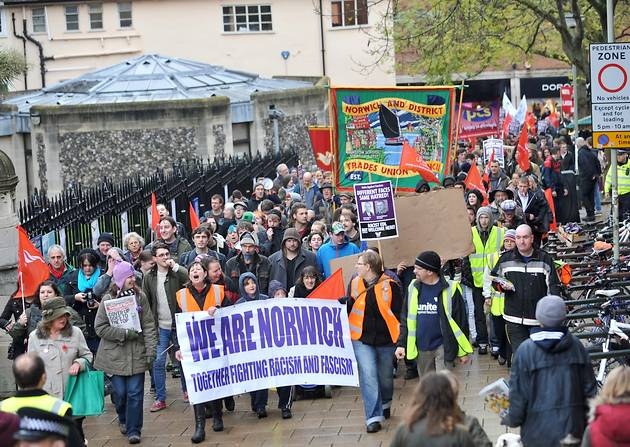 We Are Norwich march against the EDL (photo: Bill Smith)

Police made four arrests during an English Defence League march and counter-protest in Norwich.

Officers from 11 forces were on duty as about 200 EDL supporters and up to 2,000 members of the We Are Norwich coalition marched through the city. Police said the day passed off relatively peacefully, although extra officers remained in the city centre into the evening as a precaution.

The EDL organised its march in protest at Norwich City Council’s decision to ban Pastor Alan Clifford of Norwich Reformed Church for promoting “hate-motivated” anti-Islam leaflets from a council-owned stall on Hay Hill. We Are Norwich, a coalition of 25 groups, staged a counter-demonstration.

The EDL march began at Castle Gardens, passing through central Norwich to City Hall. The We Are Norwich march began with a rally at Chapelfield Gardens and also finished at City Hall.

The war memorial was barricaded off and the two opposing groups were kept apart across a “sterile zone” in front of City Hall, but there was some isolated trouble.

EDL spokesman Geoff Mitchell said: “It’s gone very well, actually. I think everybody was pretty well behaved. I thought it was so important that we had to talk about the reason why we’re here: Christianity is under attack. What’s happened to the pastor is a total disgrace and I think he should get his stall back.”

Nick O’Brien, secretary of We Are Norwich, said: “We’re delighted with how it’s gone. We had two main aims: number one, to make sure the EDL didn’t get to City Hall or get to the war memorial and, because of the sterile area put in place, that didn’t happen. Number two, we wanted to make sure we outnumbered them and send a really clear message that the EDL aren’t welcome.”