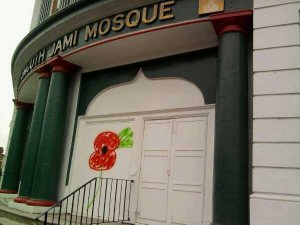 Police say they will investigate the protests which took place outside a Portsmouth mosque on Saturday.

Scores of demonstrators gathered outside Portsmouth’s Jami Mosque. They were protesting after a small group of Muslims – not from the city – burned poppies in London during the two minutes’ silence on Armistice Day.

The protest, led by former soldier David Tallard, congregated outside the mosque at midday and numbered about 40. It broke for Pompey’s home game against Doncaster, and gathered again shortly after 5pm this time with about 100 taking part.

Peace protesters who had heard about the protest also gathered outside the mosque. Shouting between the two groups then ensued with firecrackers, an egg and a golf ball being thrown into the peace campaigners.

A 6ft poppy had also been graffitied on the mosque the day before.

The Muslim community in Portsmouth said they condemned the burning of the poppies and that they would have joined any protest, had it not been directed at the Jami Mosque. Akf Suyeb, of the mosque, said: ‘When these people are pointing their fingers at us about this, it’s not right. We condemn the people who burnt the poppies, and we do show our respect to the people who died in war.”

Former soldier Mr Tallard, 25, who was injured while serving in Iraq in 2004, insisted the protest was not racially motivated despite the location outside the mosque on Victoria Road South. He said: “It is a busy road, and someone had already painted a poppy on the outside of the mosque. This protest has nothing to do with religion. We just don’t want to see poppies being burned. It’s just not right.”

A coach-load of members of the English Defence League nationalist group made the trip to Southsea from London to join in the protest. Mr Tallard, who served as a private with the Princess of Wales’ Royal Regiment, added: “I don’t know too much about the EDL but I do agree with some of what they say and it was good to see them here giving us their support.”

Simon Magorian, of the Unite Against Fascism group, said he believed the poppy issue had been “hijacked” by members of the EDL. He said: “They don’t care about it, they just want to stir up as much ill feeling against Islam as possible.”

Also “We must stand united against the hatred of a few”, Portsmouth News, 15 November 2010