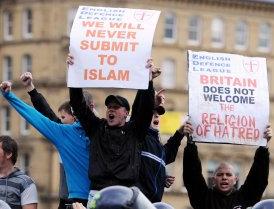 The English Defence League (EDL), the anti-Muslim ‘street army’ composed largely of football hooligans that burst onto the front pages of British newspapers in the last year as a result of its often violent protests, is to hold a rally in Amsterdam in October, EUobserver has learned.

The EDL is to demonstrate in support of Geert Wilders, the Dutch anti-immigrant firebrand, with a recently launched French Defence League and Dutch Defence League, modelled on the English group, to join them along with other anti-Islamic militants from across Europe.

The demonstration in Amsterdam is due to take place on 30 October, according to the EDL website. Mr Wilders heads to court at the end of next month on charges of inciting racism. The case begins 5 October, with a verdict expected 2 November.

Joining them there will be members of the recently formed Dutch Defence League and French Defence League, both modelled on the EDL. The latter draws its members from the ranks of far-right supporters of the Paris Saint Germain football club, known in France for long harbouring a far-right element among the club’s supporters, although elsewhere on the continent, according to EDL spokesman Steve Simmons, not all the defence-league-linked groups have their origins in football hooliganism.

The French Defence League, which employs both an anglophone version of its name and “Ligue Francaise de Defense,” founded in May and more latterly takes the name Ligue 732, after a group of Paris Saint Germain supporters, that, according the outfit, “tries to unify all French Casuals, Ultras and French Fans to fight against Radical Islam.”

The 732 figure references the year that the French king Charles the Hammer, the grandfather of Charlemagne, won a victory at the Battle of Tours halting Islamic expansion in western Europe.

Mr Simmons told EUobserver that militants from the “anti-Jihad movement” in Germany, Belgium, Switzerland and “other European states” will join them in Amsterdam for the launch of what is termed the “European Defence League” or, alternately, the much cuddlier “European Friendship Initiative.”

“I would also like to take this opportunity to announce a new demonstration that is to take the English Defence League global,” Tommy Robinson, the pseudonym of the group’s leader, Stephen Yaxley-Lennon, a former member of the BNP, wrote on the EDL website in a missive in July.

“You may be aware that the great man Geert Wilders is in court for race hate charges,” he continued. “The EDL has been in contact with our European brothers and sisters and we have decided that on Saturday, 30 October the European Defence League will be demonstrating in Amsterdam in support of Geert. We hope that all of you will be able to join us for this, what promises to be a landmark demonstration for the future of the defence leagues.”

“We feel that freedom of speech is being eroded and a lot of appeasing of radical muslims and Islam in general. Geert has the courage to take this on and we want to support him,” the group’s spokesman, Steve Simmons, told EUobserver.