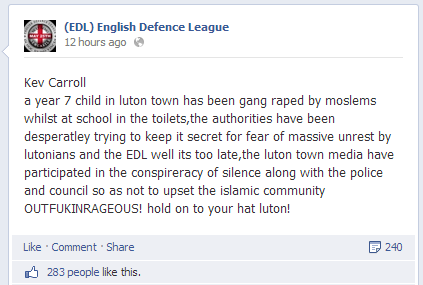 This is the inflammatory post by English Defence League co-leader Kevin Carroll that appeared on his organisation’s Facebook page yesterday. Here are some examples of the responses it provoked among supporters of the “non-violent” EDL. They include calls for arson attacks on mosques and for Muslims to be stabbed, along with appeals to “burn them all” and “kill them all”.

The story originated with Stephen Lennon, co-leader of the EDL with Carroll, who tweeted the following claim on Tuesday morning: “News coming in of a yr 7 school girl being gang raped in school toilets? By Muslims ! It’s all being kept hush hush? School in Luton.” The report was, Lennon asserted, “from a good source” and “defo true”.

Predictably, the story turns out to be just another unsubstantiated rumour spread with the intention of whipping up hatred against the Muslim community. Hope Not Hate reports:

We have scoured the local media, spoken to teachers and parents at local schools and rang every contact we could think of – and no-one has any evidence that this alleged incident took place.

In fact, it seems that no such incident has ever been logged by the local police.

Given that, according to the EDL leaders, the incident was to have taken place on school premises there is no way in the world that the police would not have been informed.

So, let’s put an end to these rumours as they are simply not true and let the authorities investigate Lennon and Carroll for deliberately inciting hatred.

Update:  Bedfordshire Police have posted a statement on their Facebook page:

“A number of you have posted questions to us about rumours on other social media forums that a year 7 child was raped in the toilets at her school. Bedfordshire Police have received no reports at all about an incident of this nature. An officer has been asked to review any relevant social media postings to see if any offences of incitement or similar have been committed.”