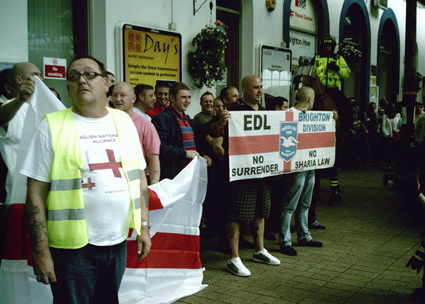 Bill Baker with the EDL at an ENA protest in Brighton, August 2010

The English Defence League has finally broken links with Bill Baker and his organisation. According to an EDL statement released yesterday: “The English Nationalist Alliance, and their leader ‘Bill Baker’, have, in no uncertain terms, been told to take their party politics elsewhere. Bill Baker is not welcome at any EDL event.”

You might wonder why it has taken the EDL so long to get round to this. The ENA and EDL have held a number of anti-Muslim protests together – in London last July, in Brighton in August and in Dagenham earlier this month – without any complaint from the EDL leadership. The sudden announcement that Bill Baker is persona non grata in the EDL would appear to be a panic reaction to a detailed exposé of Baker posted on the Exposing the English Defence League blog – and to Baker’s response, which has been to threaten violence against the authors.

Two reasons are given by the EDL for breaking with Baker. The first is that Baker publicly debated a Muslim convert in May 2010 without the authorisation of the EDL leadership and “made a complete fool of himself”. The second is that “it has come to light that Bill Baker has links with Nazi groups like Combat 18 and Redwatch”, and a screengrab of a Facebook comment by Baker is attached in which he says he will send photos of individuals involved in Exposing the English Defence League to C18 and Redwatch because “you fight to kill and these scum are in need of serious confrontation”.

What is significant, however, is the parts of Baker’s record that the EDL statement leaves out. The EDL raises no objection to Baker’s call to “start killing Muslims” and the socialists who support them. They don’t appear to have a problem with his proposal to set fire to a Muslim market stall in Barking. Nor do they mention the ENA’s support for an arson attack on a mosque in Stoke-on-Trent. No, the EDL leadership attaches more importance to the fact that Baker embarrassed them by debating a Muslim and revealing himself to be an ignorant idiot (and if that were grounds for expulsion from the EDL, how many supporters would they have left?).

Baker has issued a reply in which he accuses Stephen Lennon’s PA Helen Gower, who he holds responsible as head of the EDL admin team for the statement excommunicating him, of having neo-Nazi links herself. But let us be fair to Gower. As a representative of the EDL leadership she is well aware of the damaging effect that extremist rhetoric can have on the organisation’s reputation. So she restricts herself to posting such comments as “Muslims are total scum bags” and stops short of advocating actual physical attacks on them.

Postscript:  It is worth adding that Roberta Moore of the EDL Jewish division is a founding committee member of the English Nationalist Alliance, in which she holds the post of “Co Chairperson, Political Liaison”. So, if the EDL leadership have proscribed the ENA and banned Bill Baker, why have they not expelled Moore?