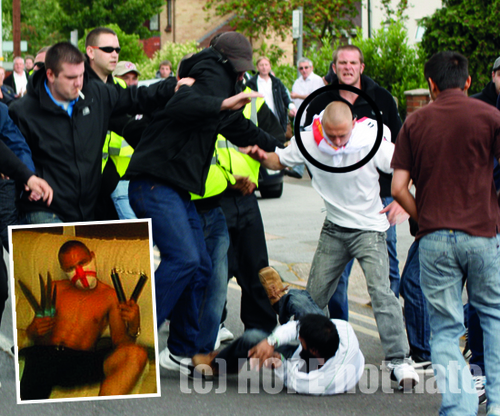 Hope Not Hate reports that thanks to photographic evidence they were able to give the police, an English Defence League member, Steven Crispin, has been convicted of an attack on two Muslim brothers during an EDL anti-mosque protest in Dagenham last year, in the course of which he kicked one of the victims and fractured his jaw. Unfortunately a decision was taken not to charge Crispin with a racially aggravated offence and he received a jail sentence of just three months.

In December last year another EDL member, John McAndrew, received a 14-month custodial term to serve a minimum of seven months having been convicted of participating in the attack on the brothers. He was subsequently handed a five-year CRASBO banning him attending EDL demonstrations or entering mosques, Islamic cultural centres and Muslim festival sites.