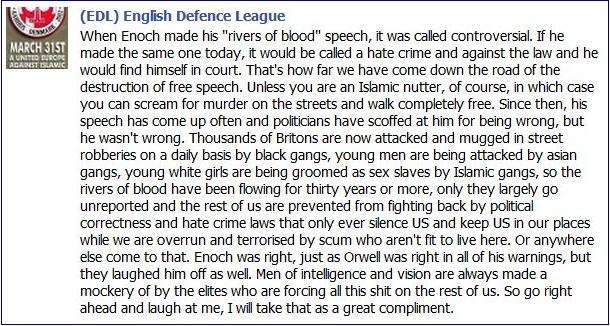 I wonder who posted this on the EDL’s Facebook page. Obviously someone who can spell and has a basic command of grammar. Which rules out 99.9% of the EDL membership.

Update:  The post has prompted the predictable spate of pro-Powell comments (“Enoch Powell needs resurecting. Nfse”, “If only they had listened to Enoch P. I fear we are all too late!”), plus the usual references to Muslims as “stinking ragheads” and calls to deport them (“close the gates send them back then weld the gates shut”), while the EDL’s token Sikh member Guramit Singh weighs in with the observation that “the only asians attacking anyone are muslims”.

And then there’s this lengthy comment, which confirms the warning in the new study From Voting to Violence? Rightwing Extremists in Modern Britain about the threat posed by a violent hardcore within the far right: 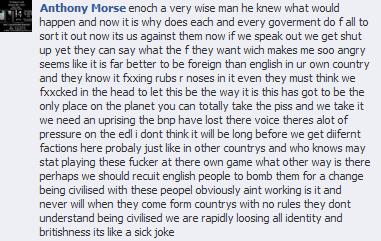