A March through Portsmouth has been prompted by the proposed opening of a Muslim school. The English Defence League (EDL) will be marching from Fratton to the Madani Academy, in Buckland, to show their disapproval of such a school being built in Portsmouth. The Muslim-only school is expected to open later this year.

Mickey Bayliss, the EDL’s regional organiser for the South West said that the school will cause Muslim children to be segregated from the community.

The 46-year-old said: “We have decided to hold a protest because of the new school opening in Portsmouth. We do not agree with having a school just for Muslims. The parents have chosen to bring their children to England or have them brought up here and they shouldn’t be left segregated to a one-faith school. We will have Sikhs and black people at the protest so we are not about being racist.”

The EDL will not be the only group protesting on Saturday. The Unite Against Fascism group will also be holding a march in the city centre from midday.

Simon Magorian, regional convenor, said: “We will be holding our own protest to show the EDL that the people of Portsmouth do not agree with them. We do not want a violent confrontation but we want our presence to be felt. Portsmouth is a multicultural town and without the diversity in faith and culture, the city would be very drab. And I think it is disgusting that they are targeting a school.”

“Police impartiality is paramount. We must retain a strictly impartial position on the nature of protest issues and causes. It is important not to demonise or alienate one particular group, and respect the right to peaceful and lawful protest of all members of the community.”

Here is an example of the “humour” of Mickey Bayliss, who assures us that the EDL is “not about being racist”. 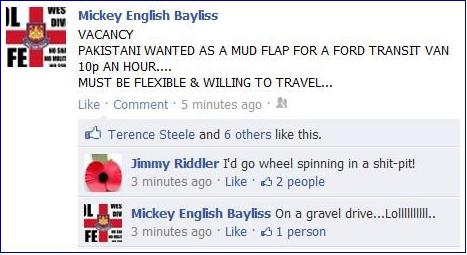