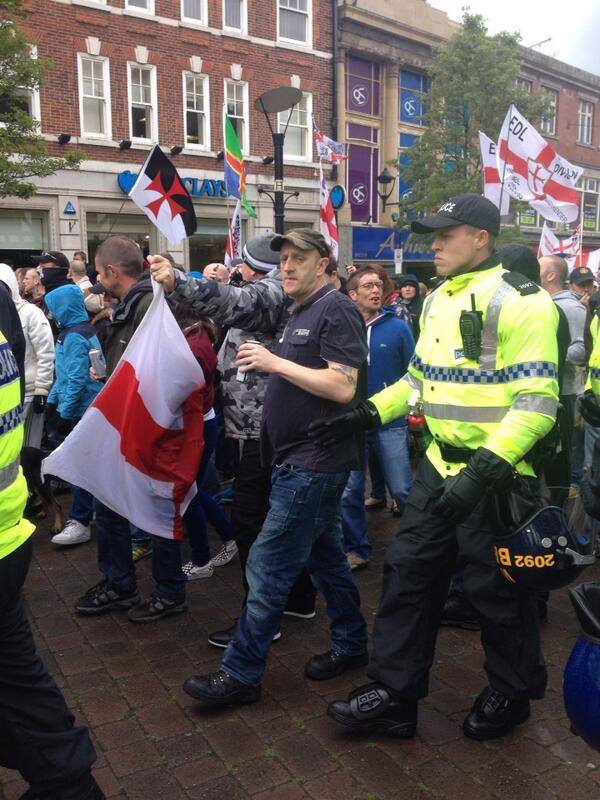 Rotherham was brought to a standstill when hundreds of English Defence League protesters marched through the town.

Hundreds of people from the EDL marched through the town centre between 1pm and 3pm on Saturday, with another large group from Unite Against Fascism holding a counter-protest at the same time.

A huge police presence of around 1,000 officers from forces around the country outnumbered both groups and ensured the march took place largely peacefully. There were no arrests and police said the event saw ‘minimal disruption and no disorder’.

Barriers were set up around the town centre, with the opposing groups cordoned off from each other. The groups traded insults across the barriers but were kept well apart.

EDL members chanted songs mentioning Islam and Allah as they marched. They gathered in All Saints Square to listen to speakers who insisted the organisation is ‘patriotic’, rather than racist.

Many pubs and businesses were shut as a result of the march. The police bill is expected to total around £500,000.

Chf Supt Jason Harwin, from South Yorkshire Police, said: “Working with partners and with the co-operation of the public and local businesses in Rotherham, the events today have passed with minimal disruption and no disorder.

“There were no arrests made and the two groups complied fully with police, allowing the protests to be carried out peacefully with minimal disruption for local residents and shoppers.”

“I would like to thank all officers and partners involved in the operation for their professionalism leading up to the event and throughout today.”

Around 500 people from the EDL marched from 1pm, gathering in All Saints Square at around 2pm. They were escorted from the square and out of the town centre just before 3pm. From UAF, around 200 people assembled at the Town Hall at around 11am, and entered All Saints Square shortly after the EDL left. 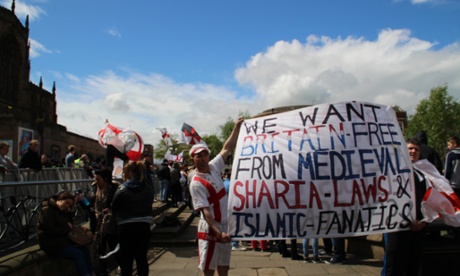