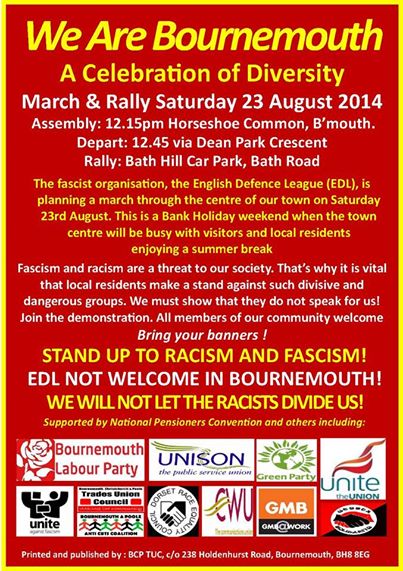 The English Defence League is planning to march through the centre of Bournemouth on one of the busiest weekends of the year.

The march, planned for this Saturday, is billed as a demonstration against Islamic extremism and could be attended by hundreds of people. In response, members of unions, the National Pensioners’ Convention and the Labour and Green parties have organised an alternative rally to celebrate the town’s diverse culture.

The EDL march will start at 12.30pm outside the Moon in the Square pub and go past the BIC to Pier Approach and up to West Cliff. The counter-protest, involving a number of groups co-ordinated by Unite the Union, plan to meet at Horseshoe Common, taking a proposed route that finishes at Bath Road South car park.

Some disruption is expected between midday and 2pm, although this will be for short periods of time while the marches move through different areas.

Adnan Chaudry, chief officer of the Dorset Race Equality Council, accused the EDL of racism. He said: “We recognise that the EDL is a racist organisation whose main activities are street demonstrations against Muslim communities. They deliberately seek to whip up tension and violence between communities. We’re not going to allow them to divide our communities in Bournemouth.”

The EDL says that it is not a racist organisation and that it is only against “extreme components of Islam”.

David Stokes, Labour’s Parliamentary candidate for Bournemouth West, will take part in the alternative march. He said: “We are using the slogan ‘We Are Bournemouth’ for our march and rally because we are trying to highlight the fact that Bournemouth is a peaceful multi-cultural place where we welcome people from around the world.”

Police and council chiefs say they are preparing carefully for a march by the English Defence League – and a counter protest by Unite the Union, in Bournemouth on Saturday.

The police say they will be taking an active and visible role on the day to minimise any risks and help manage any disruption, provide useful updates to the public, and to quickly respond should any crimes occur.

Superintendent Nicky Searle, Gold Commander for Operation Fig, explained: “The police and other public authorities have a clear legal obligation to facilitate peaceful protest; whatever the cause and even if it creates some disruption to other people.

“We will balance this right to peaceful protest with the rights of others to go about their normal business. This means we will monitor both marches to help keep everyone safe as they move through the town, provide information to help minimise disruption, and respond quickly if any crimes or significant disorder occurs.

“Both groups have contacted us, which has allowed us to better understand their intentions and given us a realistic picture allowing us to police the protests as proportionately as possible.

“We have also negotiated so that their rights to protest are balanced against the level of impact on the town. For example, following discussion, the EDL agreed not to march during the busy Air Festival weekend and both groups agreed to march simultaneously, which will minimise the period of travel disruption.

“We are working with Bournemouth Borough Council and other partners to manage any impact on the town and to reassure local people. This includes liaising with other emergency services to ensure access for response vehicles during the marches.

“With assistance from the Council, we aim to minimise the level of traffic disruption, implementing temporary rolling road closures only when necessary during the marches. On the day, we will keep people up-to-date with travel information and anything else that may impact on them in real-time on our website and via Twitter.

“We have been in contact with local councillors, MPs and business leaders to advise them about the protests. Detailed information will be distributed to businesses and local residents in the areas affected a few days before the protests and will be made available on our website. It has not been possible to do this earlier due to the groups’ intentions and proposed routes only being finalised this week.

“On the day people will see an increased police presence in the town. However, I would reassure local residents, businesses and visitors that our intention and expectation is that while people will probably notice the protests taking place for a few hours, they will still be able to enjoy the town as normal with minimal disruption for the vast majority of the day.”

The English Defence League plan to meet at The Square and march to the West Overcliff path between the BIC and the clifftop. The counter-protest, involving a number of groups coordinated by Unite the Union, plan to meet at Horseshoe Common, taking a proposed route that finishes at Bath Road South car park.

Some disruption is expected between midday and 2pm, although this will be for short periods of time while the marches move through different areas. Estimates of protest participants are usually very unreliable; however at this time it is anticipated that each procession and rally will number in the hundreds.

Supt Nicky Searle said the groups have agreed to march simultaneously and said Twitter and the Dorset Police website will be updated as the events take place and that information will be given to local residents and businesses this week.

Update:  You’ll note that a statement by Bournemouth EDL is appended to the Echo report. It asserts: “We are talking about challenging the extreme components of Islam and its peoples’ cultures. We certainly do not have a problem with every Muslim.”

It is difficult to see how the pious claim that Bournemouth EDL is opposed only to “extreme components of Islam” is compatible with the declaration on its Facebook page that it is committed to protesting “against the spread and threat of Islam in England”.

Nor is the claim that Bournemouth EDL “do not have a problem with every Muslim” easily reconciled with their suggestion that British Muslims are all secret supporters of ISIS: 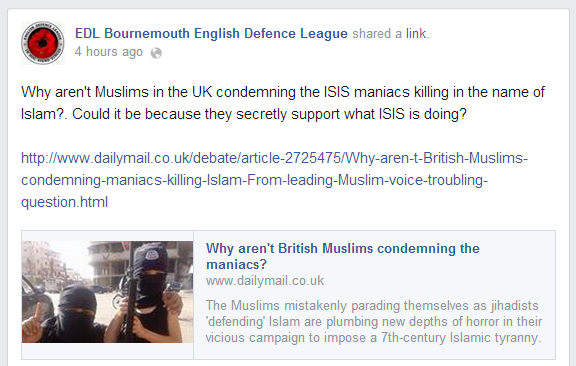 I mean, you hardly expect fascists to tell the truth. But they might at least make the effort to lie a bit less transparently. 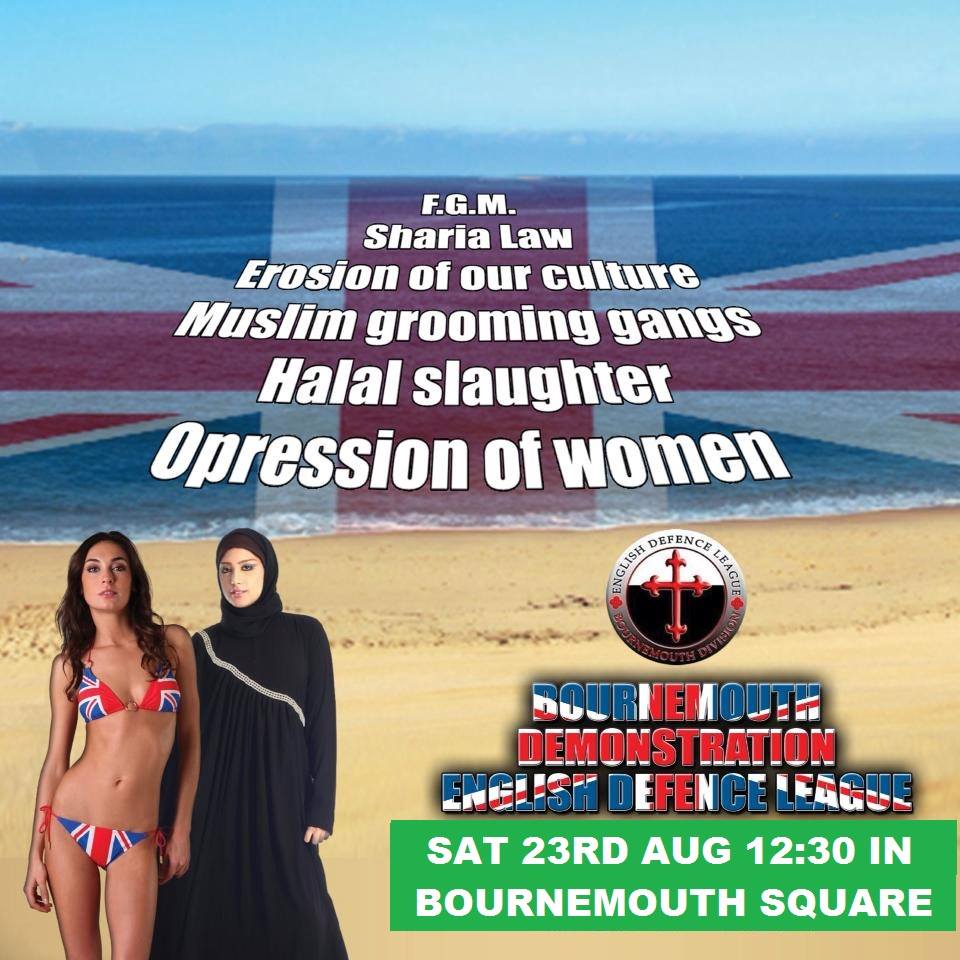