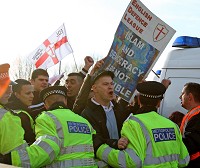 Two men have been arrested on suspicion of assaulting police officers during an English Defence League (EDL) march and counter-protests in Peterborough.

There were other arrests as the EDL marched and rallies were held by the TUC and Unite Against Fascism. Cambridgeshire Police said two people were also arrested for affray during a minor disorder in Wellington Street. And two people were held over possession of an offensive weapon at Peterborough railway station. The force said an estimated 500 protesters were involved.

EDL leader Tommy Robinson said: “Militant Islam is probably at its peak in this country. The problem will get worse and worse unless it’s tackled, and that’s what the English Defence League is trying to do.” Shortly after 1300 GMT he gave a speech via a loudspeaker in Lower Bridge Street. Some supporters chanted “EDL” and “I’m England till I die”.

Unite Against Fascism said it and Peterborough TUC had called for a “march for unity” from Bishops Road car park to show local opposition to the “invasion” by the EDL. “The EDL hope to stir up hatred against the city’s Muslim population and the many migrant agricultural workers who travel from across Europe to work on farms during the harvests,” a spokesman said.

Further update:  Here are some quotes from the rambling speech by “Tommy Robinson” (Stephen Lennon) to the EDL rally in Peterborough: “Islam rules this country with fear… For fifteen years we have allowed 10 per cent to dictate to 90 per cent. No fucking more.” “Islam has never been a religion of peace. It never will be a religion of peace.” “Islam is a disease. [Shouts of ‘fucking scum’ from the crowd.] It is a disease. Winston Churchill once said Islam in a man is the same as rabies in a dog.”

So much Lennon’s lying claim that the EDL is opposed only to “militant Islam” or “Islamic extremism”.

Lennon also made his familiar pitch for support from the Sikh and Hindu communities: “The biggest community I wish to thank are the Indian community of this country, the Sikhs and the Hindus of this nation. They are the most British. If ever there is an example of integration it is the Sikh and Hindu communities. These people wear our badge of pride. 88,000 of them died in the world war. It has been left to us to educate the uneducated of this country to the difference between Sikhism, Hinduism and Islam.”

If anyone needs educating it’s Lennon. This idiot talks about the “Indian community” as being made up of Hindus and Sikhs, but is evidently unaware 13.4% of the population of India is Muslim, compared with 1.9% who are Sikhs. But then, this is a man who thinks that Muslims constitute 10% of the population of the UK (the real figure is around 3%). Still, Lennon isn’t quite as thick as his mob of violent racist followers, who fail to make any distinction between Sikhs, Hindus and Muslims, and habitually abuse all British citizens of South Asian origin as “Pakis”.

As for Lennon’s attempt to counter charges of racism and fascism by applauding the readiness of Hindus and Sikhs to “integrate”, while simultaneously spitting bile against Muslims, Nick Griffin has been playing that game for years. But then, we know that Lennon was once a member of the BNP, so he obviously learnt a lot from his former leader.

Particularly risible was Lennon’s pious condemnation of the current student protests: “The demonstrations in London have disgusted us all. We never want to see British police attacked by the people of this country.” This from a man who in 2005 received a 12-month prison sentence for assault after kicking a police officer in the head.

Postscript:  And Sky News, disgracefully, has provided Lennon with a platform to repeat his attacks on Muslims. In the course of a televised interview Lennon stated:

“It’s only in our country that our politicians are not talking up for us against the struggle against Islam. We have been sold out and led to believe that Islam is a religion of peace. It’s not. It never has been. It never will be. And it’s time to make a stand against it … twenty years down the line we will be over-run by Islam, because Muslims are breeding at four point four children. That’s what they’re having on average. We’re having one point three.

“Now, they keep saying, we’re a minority, we’re a minority. But their communities are going to quadruple over the next twenty years. And that wouldn’t be a problem if they were integrating. If they weren’t being taught hatred from the age of four against every single one of us in their madrassa schools, it wouldn’t be a problem. But it’s a ticking time bomb. Unless we wake middle England up now to realising what is coming to a town near you, in towns and cities like Luton, where I live, it’s a disaster waiting to happen. So, unless it stops and we wake people up, there’s going to be civil unrest across this whole country.”

Lennon has his own proposals for dealing with this threat: “I’d like to pull any Muslim that doesn’t swear allegiance to Queen and country. Anyone who goes against trying to undermine our country with Shariah law. Get rid of all the Shariah law courts. Stop all Islamic immigration into this country.”