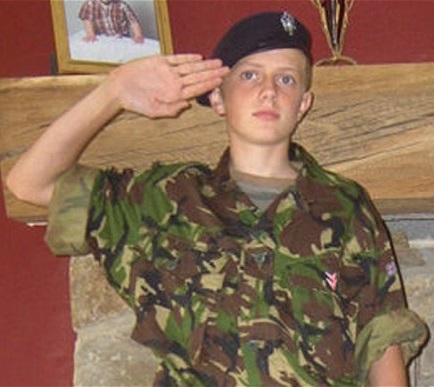 A teenager who wanted to join the Army is believed to have lost both hands in an explosion at his home.

Jordan Smith, 19, was airlifted to hospital with serious injuries after the blast at his parents’ luxury barn conversion. A bomb disposal squad was called in and four neighbouring homes were evacuated until the area could be checked.

The cause of the explosion was not known last night. Police say they are not looking for anyone else in relation to the blast.

Neighbours said they knew little of Mr Smith’s interests, but it later emerged that his Facebook page features slogans such as “No more mosques”, “We hate Muslim extremists” and “No surrender to Al Qaeda”, as well as references to the English Defence League.

One fellow resident of Wiston, a village in Pembrokeshire, Wales, claimed the teenager had joined the Army last year but did not complete his basic training because he ‘was not focused properly’. Bernie Jones, 67, said: “The Army is definitely his orientation – he was very keen.’

Mr Jones said: “There was some sort of an explosion and it looks like Jordan has suffered bad hand injuries. Police threw a cordon up around the entire village and the bomb squad moved in.”

Mr Smith came to the village six years ago from Stoke-on-Trent with his parents Anthony and Rita, who until recently were directors of a cleaning company. Another neighbour said that he had heard an explosion at around 11am on Thursday. He added: “The helicopter was soon overhead and landed in a field next to the house.”

Villager Fiona Morgan, 27, said: “Neighbours said there was an almighty bang and a bad smell. There’s been a lot of police and sniffer dogs. It’s a really, really sleepy and quiet village. It’s very peaceful normally – just a lovely place to be.”

Mr Smith was last night in a stable condition at Morriston Hospital in Swansea. However, there were fears that he might lose both hands.

A spokesman for Dyfed Powys police described his injuries as “non-life threatening” and said that their investigation is continuing. She added:

“The safety of all in the area is our priority, and the small number of residents who were evacuated have not been allowed back to their homes at this time. Explosive Ordnance Disposal attended the scene to provide their specialist skills and knowledge and to ensure safety of those at the scene, but have left. Police are not looking for anyone else in connection with this matter.’

Searches and enquiries were set to continue for most of yesterday evening, she said.