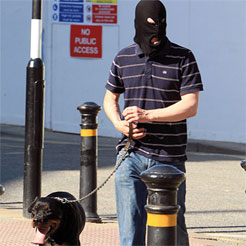 A march against extremism has been rescheduled for next month – so more than 1,000 protesters can take part.

The right-wing English Defence League (EDL), which had originally organised the march for August, said it put it back as a direct result of our front page story last week revealing the Royal Anglian Regiment would deliberately avoid Luton on its 150-mile charity walk. The regiment said it was doing so because of the abuse it received from extremists on its homecoming parade in the town centre in March.

Now the EDL has reorganised its march for September 19. EDL spokesman Tommy Robinson said: “It shows Luton is a no-go area for soldiers. It’s another way of saying the extremists have won. They’ll be celebrating. We’ll have more than 1,000 for our September march.”