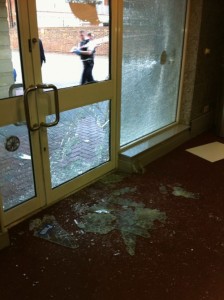 The racist thugs of the English Defence League teamed up with their Nazi pals in the British National Party to attack an anti-racist meeting in Barking on Thursday night.

They smashed the windows of Crown House on Linton Road, where the meeting was taking place. A woman NHS worker who was attending the meeting was injured in the attack. She had to receive hospital treatment.

The meeting went ahead despite the EDL’s attempts to storm it. It had been called by local councillors and trade unionists together with UAF to defend multiculturalism in Barking & Dagenham.

Some 25 EDL thugs threw bricks and rocks at Crown House causing damage to the building’s exterior. They chanted “EDL” and shouted racist abuse and death threats. At least two Barking BNP activists were involved in the mob attack.

The EDL has been active in Barking & Dagenham recently whipping up race hatred over proposals to build a mosque in the borough.

Anti-fascist activists believe the local BNP branch is turning back to street thuggery after the losing all 12 of its councillors in last year’s elections.