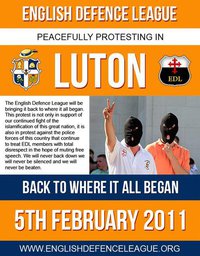 The EDL have issued a press release announcing that they have withdrawn their invitation to Pastor Terry Jones to speak at their rally in Luton in February. The EDL state:

“we strongly disapprove of burning the Koran, precisely because we believe in those principles of free speech and free expression. We do not believe the Koran should be burned, but rather read, so that people come to understand its inherent violence, supremacism, and hatred and contempt for non-Muslims. It is essential that people know what the Koran teaches, so they can see how far its teachings are from the free traditions of England that we have pledged our lives to uphold and defend.”

Perhaps they should tell that to their own members, who evidently are far from clear that this is the EDL’s policy. And shouldn’t Nick Griffin be given credit by the EDL, since this argument is lifted directly from the BNP’s website?

“The EDL is extremely proud of its diverse support base including it’s primary base of geographical divisions from all across England encompassing much ethnic diversity. In addition we have specific divisions drawn from groups particularly threatened by encroaching Sharia: a Lesbian Gay Bisexual & Transgender (LGBT) Division; a Jewish Division and recently a Pakistani Christian Division. The EDL also enjoys the active participation and support of many former members of the Armed Forces. In light of our strong commitment to these groups and some of the Pastor’s statements and associations, we feel it inappropriate to offer Pastor Terry Jones an invitation to attend an EDL demonstration.”

Oddly, the press release concludes with a link to a CBS report about the Westboro Baptist Church picketing the funeral of a US serviceman killed in Afghanistan, which would suggest that the EDL have confused Terry Jones with Fred Phelps. Could they really be that stupid? On past experience, yes they certainly could.

If the EDL are worried that association with Jones might tarnish their hard-earned reputation for moderation, they might be advised to deal with some of the hate-filled racists in their own ranks. The first comment that follows the press release on the EDL’s Facebook page reads: “I hate stinkin muslims… Fuck off home.!!!!”

Postscript:  Or perhaps, to be charitable, the EDL meant to link to a report about the support given by Jones’s Dove World Outreach Center to a Westboro Baptist Church protest outside a liberal church in Gainesville last April.