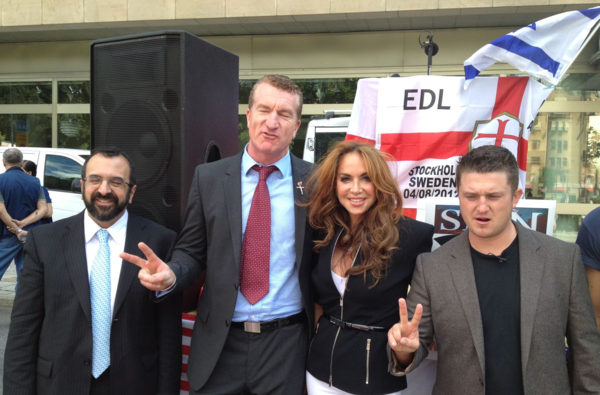 Home Secretary Theresa May is considering banning two US bloggers from entering the UK to speak at an English Defence League rally. Pamela Geller and Robert Spencer are due to join an EDL march in Woolwich, where Drummer Lee Rigby was killed. The pair are prominent “anti-Islamisation” campaigners in the US.

Home affairs committee chairman Keith Vaz claims their presence will fuel hatred and is calling for them to be denied visas. Mr Vaz said: “I am alarmed that the EDL is planning this type of march in Woolwich. It is clear that the location, motivation and attendees at this march will incite hatred. Adding incendiary speakers such as Pamela Geller and Robert Spencer just fuels the fire.

“Before we have to pay the costs for the extra policing required for this demonstration, the Home Secretary should consider using her discretion to ban these two speakers from entering the country. A ban should be enforced properly and physically stop people entering our borders.”

The Home Office said it did not routinely comment on individual cases but the home secretary was aware of Mr Vaz’s letter and would be responding in due course. Mrs May has the power to exclude non-British citizens from the UK if she considers their presence to be “not conducive to the public good” but she must act in a “reasonable, proportionate and consistent” way.

Ms Geller, of the Atlas Shrugs blog, and Mr Spencer, of Jihad Watch, are co-founders of the American Freedom Defense Initiative, best known for a pro-Israel “Defeat Jihad” poster campaign on the New York subway. The poster, which caused controversy in the US when it appeared last year, read: “In any war between the civilized man and the savage, support the civilized man. Support Israel. Defeat Jihad.”

The pair plan to join Danish activist Anders Gravers, of Stop Islamisation of Europe, and EDL leaders Tommy Robinson and Kevin Carroll, at the event, on Armed Forces Day, Saturday, 29 June, where they will lay a wreath at a memorial to Drummer Rigby.

Anti-fascist campaign Hope Not Hate has started a petition calling on Mrs May to deny Ms Geller and Mr Spencer a visa on the grounds that “their very presence in the UK will give encouragement to racists and extremists”.