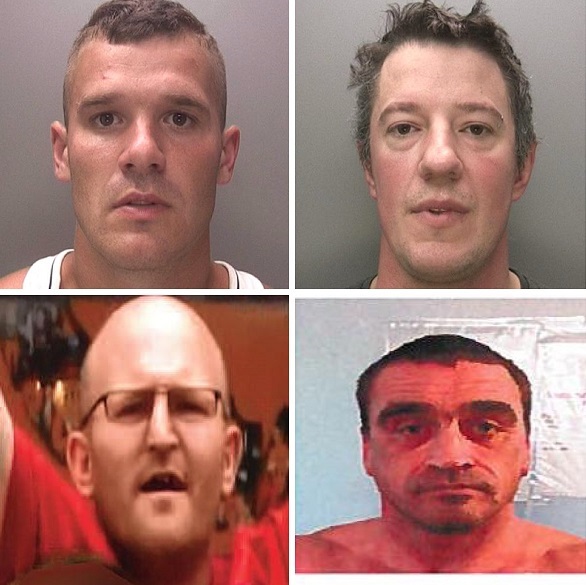 An English Defence League supporter who hurled a fire extinguisher at police officers at “almost point blank range” as violence flared in Birmingham has been jailed.

Ashley Rowland was among up to 300 people involved in bloody clashes with police during a demonstration in the city centre on July 20 last year. Thirty officers were injured with one needing hospital treatment.

Judge Richard Bond said Rowland was the most heavily-involved of more than 50 defendants due to be sentenced over the violence and had moved between various pockets of trouble.

He chanted racial and anti-religious slogans with others and aggressively confronted officers in Centenary Square.

And Rowland tried to scale a wall outside the International Convention Centre and threw a plank of wood which hit a police officer after he and other demonstrators raided a building site. Outside the Hyatt Hotel, he picked up three pieces of a metal hotel sign which he also threw at a police cordon, Birmingham Crown Court heard.

At one point four officers became trapped on Broad Street and were surrounded. Judge Bond told Rowland: “You picked up a fire extinguisher and forcefully threw it at the trapped officers.”

Rowland, 25, of Mexborough, South Yorkshire, had previously admitted a charge of violent disorder and was jailed for 31 months.

Three others were also sentenced for their roles in the trouble today. Melvyn Parker, 47, of Mansfield, and James Cocks, 35, of Binton Close, Redditch, were both sentenced to two years while Jason Harris, 40, of Eccles, Salford, was jailed for 20 months. They had also pleaded guilty to violent disorder.

Passing sentence, the judge said the atmosphere before the 2,000-strong demonstration was “highly charged” following the murder of soldier Lee Rigby on a street in London.

The trouble lasted for around two hours and broke out at seven sites as EDL supporters tried to break through a police cordon and reach counter-demonstrators. The worst violence was in Centenary Square where missiles were thrown, officers were kicked and punched and portable toilets were used as weapons.

Gerry Bermingham, for Rowland, said he had set up a small business since the incident and was trying to rehabilitate himself. Nigel Stelling, for Parker, said he was “out of control” with drink and drugs when he joined the EDL.

A total of eight men have now been jailed for their roles in the violence. Yesterday, four other defendants were jailed for a total of more than six years for their parts.