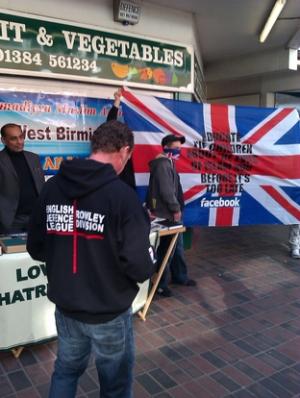 A Muslim book stall in Cradley Heath market was stormed by over 25 thugs from the English Defence League this weekend.

The shocking attack occurred in front of shoppers, many of which were women and children, at the market at 2.30pm on Saturday. The local Ahmadiyya Muslim book stall and Qur’an exhibition was attacked and volunteers were manhandled and abused by members of the Far Right organisation.

Shocked Ahmadiyya outreach worker Toby Ephram described the scene in the market. He said: “About 25 of the EDL group stormed our stall in Cradley Heath pushing, shoving and threatening our members. We have the book stall to raise awareness of our work in Britain and in the local community we are proud to be British Muslims and this incident saddened us. Our motto is ‘Love for All – Hatred for None’ and we do not meet violence with violence so we just stood there and did not respond to the provocation.”

He added: “I’d like to thank the police for responding to the problem so quickly and controlling the situation and we will be back as usual at the market on Saturday.”

Halesowen and Rowley Regis MP James Morris condemned the incident and branded it an ignorant and mindless attack. He said:

“The people storming the stall may claim that they are defending their English identity, but tolerance for other people’s views and beliefs has long been a key part of what it means to be English. The Ahmadiyya Muslim Community in Cradley Heath actively works to help different sections of our society to live peacefully alongside each other, whatever their religion.”

He added: “This mindless attack is absolutely deplorable and can only have been caused by ignorance of the views and action of the Ahmadiyya Muslim Community locally.”

A spokesman for West Midlands Police said: “We were called at 1.40pm with reports of people causing a disturbance in the Market Square area of Cradley Heath. Officers attended the scene and the groups dispersed.”

On Boxing Day 2009 Cradley Heath Mosque and Islamic Centre in Plant Street was burnt to the ground by arsonists.