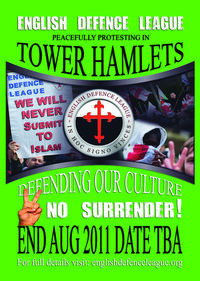 As we have previously noted, the proposal for a demonstration in an area described by the EDL leadership as “the heartland of Islamic terrorism” has been accompanied by explicit threats of violence by their supporters against the local Muslim community.

Update:  The EDL have posted an article on their website explaining the decision to invade Tower Hamlets:

In an area where a large percentage of people do not even speak English, the population is increasingly Muslim, and the local council is controlled by a man kicked out of the Labour Party for his links to Islamic Supremacist organisations, it is no wonder that we are seeing the continued rise of what we have previously referred to as the British Taliban. How long will it be before it is simply impossible for a non-Muslim to live in the area? How long will it be until Tower Hamlets will truly become an Islamic state within a state? Whatever the rate of decline, the future for Tower Hamlets is looking bleak.

Only last week, four demented fanatics from Tower Hamlets were convicting of brutally attacking an RE teacher because they didn’t believe that a non-Muslim should be allowed to teach school children about Islam. The homophobic hate campaign that we recently reported on was also the work of an inhabitant of Tower Hamlets, and the area has been plagued by attacks on women and homosexuals.

As you can see from the links, the material the EDL uses to justify its plan to intimidate the Muslim community in Tower Hamlets has been provided by the mainstream right-wing press – by the likes of Andrew Gilligan and the Daily Mail.

The accompanying video makes clear how little the EDL themselves actually know about the area. Among other glaring errors of fact, it states that George Galloway was replaced as MP for Bethnal Green and Bow by Abjol Miah.

You’ll also note that the EDL’s original claim that they were protesting against “radical Islam” or “Islamic extremism” is increasingly sidelined in favour of the – more honest – argument that their hatred is directed against Islam as such.

Here of course they find common ground with other, more local right-wing Islamophobes like Alan Craig.