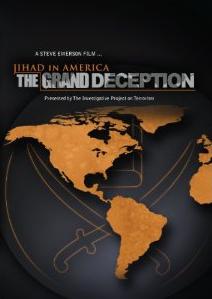 “Resembling the anti-Communist, red-baiting films of the 1950s, Jihad in America: The Grand Deception effectively sums up its intentions with its title. This documentary co-directed by Rachel Milton and Steve Emerson (the latter is the executive director of the organization Investigative Project on Terrorism) is a broad indictment of Islam, seemingly implicating every person of that faith as a potential violent jihadist determined to destroy America.”