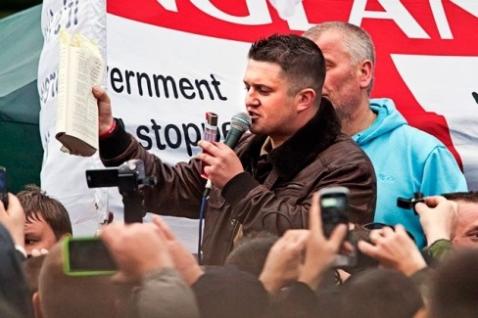 This weekend saw the English Defence League pouring into Rochdale to protest against what they believe was underlying cultural issues which saw nine men convicted last month for grooming under-age girls for sex.

EDL visited last year too in March, voicing concern over the same issue. But this time it was different. The arguments were more refined and directed. It wasn’t the usual rants that have been echoed by EDL members at national rallies: “extremist Islam is the problem”, or “Muslims want Shariah law”.

Outside Rochdale town centre, EDL leader, Tommy Robinson held the Quran and said, “This book legitimises the rape, prostitution and abuse of our daughters”. Crowds cheered him on as he continued to deplore what he referred to as a “7th century text”.

“The reason why these men rape these children, it could be because they’re perverted criminals, but it could be they’re following this manual. When will the police and politicians realise the link between this and them men raping our kids…. This is the link. Be brave enough to identify it”, said Tommy Robinson.

In front of a packed crowd of around 200 people he said publicly “What is stopping me from burning it (the Quran)?” Protestors in the crowd began jeering, whilst some said “Let me burn it Tommy” offering lighters.