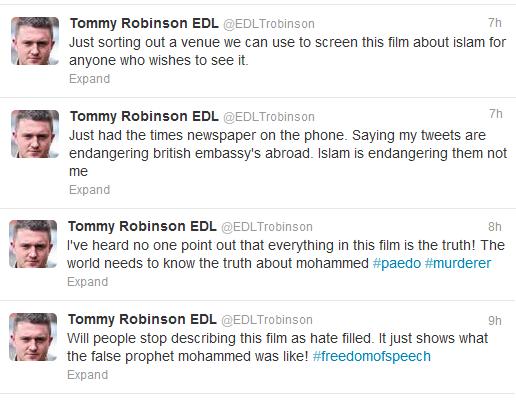 Stephen Lennon’s claim that he is already sorting out a venue to screen The Innocence of Muslims is probably just a wind-up, as it is unlikely that he’s even arranged to get a copy of the film yet. That isn’t going to stop him doing so in future, however. He is clearly desperate to find a means of reviving his demoralised and disintegrating organisation, so whipping up the troops into a self-righteous fury over the EDL’s entitlement to show a film exposing the evils of Islam would be an obvious move.

Over at Hope Not Hate, Nick Lowles suggests that if Lennon does try to screen the film the EDL leader “should immediately be prosecuted for incitement”.

But incitement to what? Not racial hatred, as Muslims are defined as a multi-ethnic faith community and, unlike Jews or Sikhs, are not covered by the racial hatred law. Perhaps incitement to religious hatred, then? But the religious hatred law requires that the language or images used should be “threatening” and, further, that the prosecution should prove intent. An attempted prosecution under the latter legislation would fall at the first hurdle, since judging by the YouTube trailer The Innocence of Muslims contains no actual threats. And how could it be proved that Lennon’s intention was to incite hatred, as he would undoubtedly deny this, claiming instead that he merely intended to inform the public about the true nature of Islam?

Once again, we run up against the utter inadequacy of the existing religious hatred law. While we can hardly expect that the present Tory-led government will do anything to rectify this situation, it is an issue that a future Labour government will have to urgently address.

Update:  Lennon’s next trick was to announce that the EDL would show The Innocence of Muslims at their planned demonstration in Walthamstow on 27 October. Quite where and how they would do this was unclear, and EDL News was among those who questioned whether it was a serious proposal. This view is reinforced by the fact that Lennon’s Twitter announcement was initially posted on the EDL’s Facebook page but has since been removed.