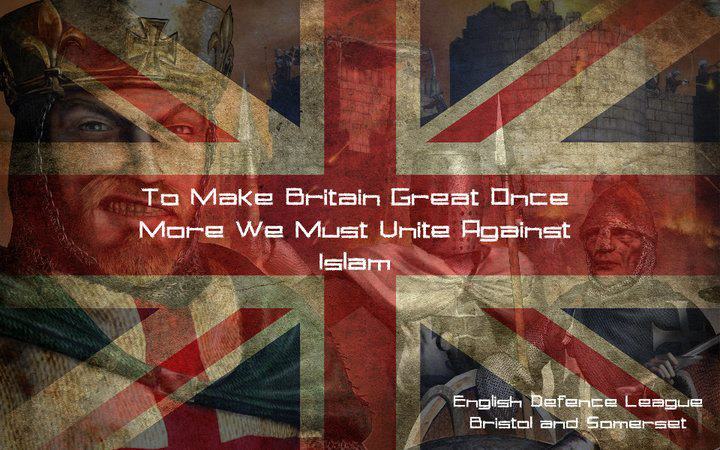 Bristol24-7 has posted its promised interview with an English Defence League spokesperson, one “Terrence Witter”, responding to condemnation by three local Labour politicians of tomorrow’s EDL march in Bristol.

Witter accuses the Labour Party of organising “rent-a-mobs” to confront the EDL, apparently oblivious to the fact that the Labour politicians who condemned the EDL march couldn’t even bring themselves to back the peaceful non-confrontational “We Are Bristol” counter-demonstration. He states: “We encourage our supporters to not rise to the silly chants of ‘waycist’ from idiotic communist types.”

Meanwhile EDL News has posted a screenshot of a comment from the Facebook page of a Bristol EDL member rejoicing in the name of “Chris Rasher Bacon” which does rather undermine the claim that the EDL are non-racist. Not that this will bother the EDL’s regional organiser, Mickey Bayliss, who is not averse to the odd “Paki” joke himself. However, EDL News reports that Bayliss is apparently a bit worried about the turnout for tomorrow’s protest – numbers at EDL demonstrations have been in decline for some time now – and he has posted an appeal on the “EDL & BNP United we stand divided we will fall” Facebook page urging his fellow fascists to support tomorrow’s march.

An additional worry for the EDL is that their supporters will get drunk and attack the police (who, as Terrence Witter told Bristol24-7, have been “very accommodating” to the EDL). So the organisers have issued instructions that the Bristol march will be a “dry event”. This decision has been endorsed by East Midlands EDL organiser Tony Curtis, who complains that “there are people who think that demo day is just a big piss up and who continue to drag decent EDL supporters through the gutter with their pissed up actions”.

It is difficult to see how this will help to boost numbers on tomorrow’s march. As Hope Not Hate points out, the alcohol ban “will no doubt be a huge hammer blow to most of the EDL members as the vast majority appear to have had a skinful when the demo finally starts”. Indeed, for many EDL protestors getting paralytically drunk is one of the main reasons for attending demonstrations, second only to inciting hatred against Muslims.